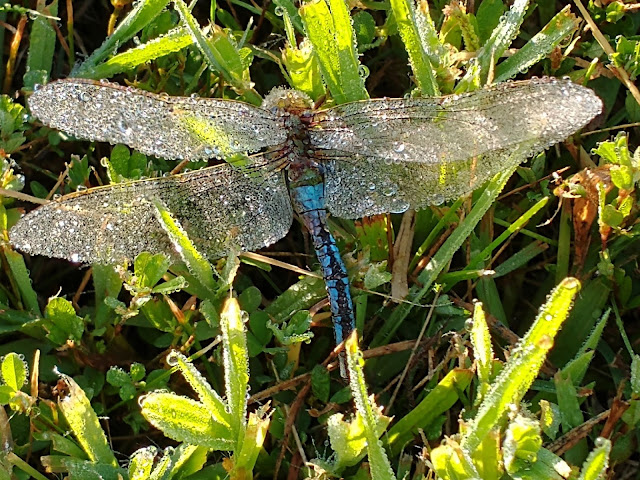 Credit for this photo of a dewy dragonfly belongs to my dear friend, Lynne - whose old gate captivated me when we visited in early August.  Lynne sent this picture to me (several weeks ago now) with a note that I had "reminded her to look for everyday beauty".  A wonderful compliment!

Thank you, Lynne!  I'm sorry it took me so long to post it.  Though I know you know I've been a bit distracted in recent weeks.
Oh...  And just for fun...  turns out flowers in at least one Walmart are intentional.
Posted by Becki 8 comments:

Email ThisBlogThis!Share to TwitterShare to FacebookShare to Pinterest
Labels: Art in my everyday, Everyday Aesthetics, Nature

September started out busy and full, but it's coming to a screeching halt with hand surgery today.  The surgery I'm going to have is CMC Arthroplasty.  It's to relieve basal joint arthritis in the thumb.  I'm having the left hand done first.  If it's a success, then in a year or two I hope to have the right hand done too.  Surgery has felt like long time coming, and yet it's amazing that now it's here already.  Why is it always that way?
By the time you read this, I may actually be finished with surgery and home!
While I've been quiet online these past few weeks, it's been busy here.  Finishing up a 2021 tax return for my brother's estate, and an amended return for 2020 has been an excruciating experience as I've worked with an accountant that has been a serious disappointment.  But all of it is finally on its way to the IRS and to the State, and I'm relieved to have that task finished.
Other than that, what has occupied me is the stuff life. I've enjoyed gardening this summer, and doing some food preservation.  There was a real push these last few days to finish up whatever I could since I won't be able to do that kind of thing again 'till my hand heals up.  We ended up giving a bag of cucumbers to friends on Monday because I had other things I wanted to do the day and night before surgery.  I doubt I'll be posting anymore for the rest of the month (unless I can find a draft that's ready to post).  I'll try to visit my blogging buddies in the upcoming days, but if I'm able to type comments I imagine they'll be short and sweet.
Tomatoes, cherry tomatoes, cucumbers, green beans, zucchini, yellow squash, and Marconi Giant sweet peppers have been a regular sight in the kitchen.  I can't believe I've failed to take pictures of it all during these last weeks especially.  While I regret that, I'm happy to be putting away the canner, and unused jars, and all the paraphernalia that goes along with preserving the fruits of summer.
Here's just a small glimpse into what was happening around here the last few weeks. 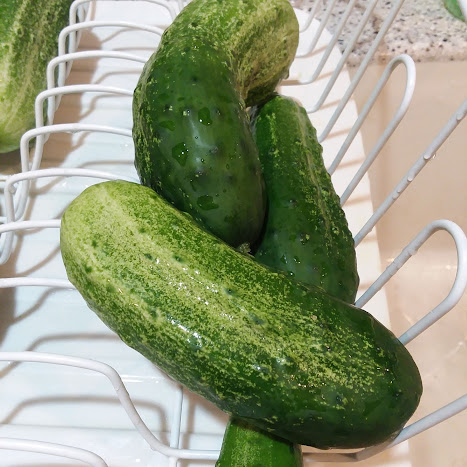 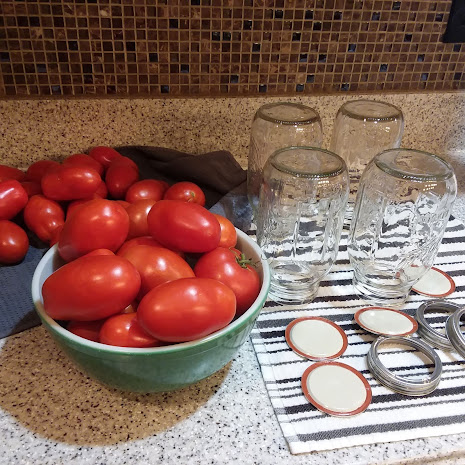 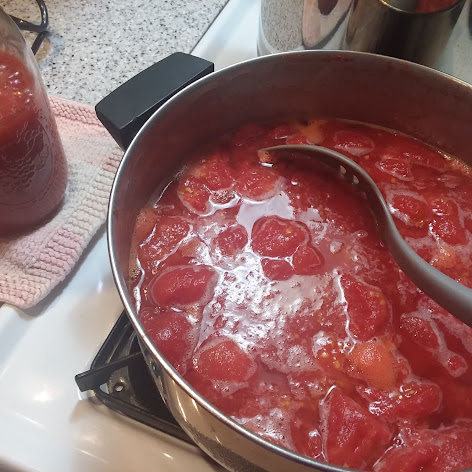 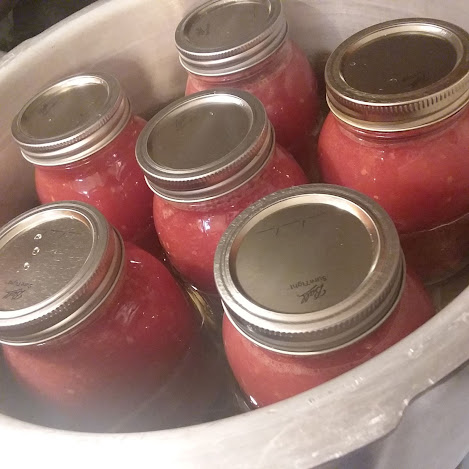 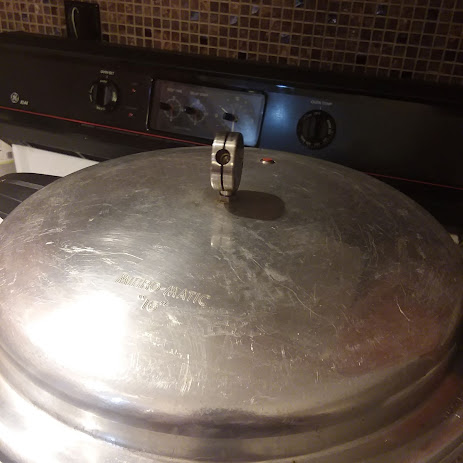 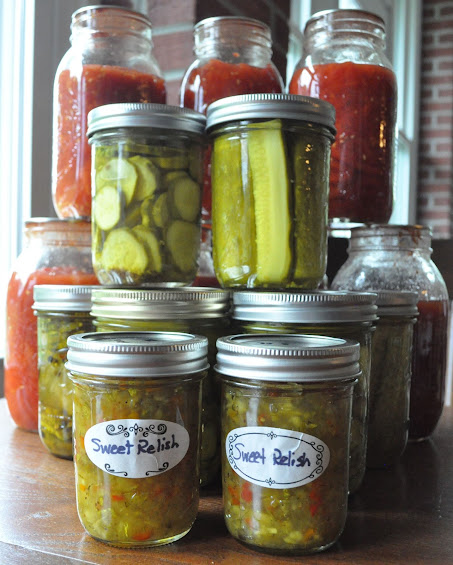 These few pictures do not capture all I've been up to.  Because the green beans were ready for picking in too small of batches to can, I froze all of them as I picked them.  What we didn't eat fresh, that is.  Sweet peppers, zucchini and squash were either enjoyed fresh, or were frozen for future use.  And while the last pictures show what I canned, it's just part of what is in the pantry.
Making pickles was a totally new experience for me.  Dill pickles were fairly easy, but Bread and Butter pickles were a challenge.  The first batch I made I thought were good, and I even shared them with some friends, but after that I just couldn't get the taste right.  I admit I've thrown out almost as much pickled cucumbers as I've ended up with.  One of these days I hope to have a taste test of the batches I've saved with my sons who like B&B pickles.  I'm hoping to find there are a few jars that are worth eating.
Oh, and I almost forgot...  yesterday I dehydrated a bunch of walking onions for future use.  A large bowl of them were cut up and after dehydrating were reduced to a mere pint-size jar.  My dehydrator (that I hadn't used in many years) didn't appear to be working very well, so I finished them off in the oven.  I should have just started with the oven - I would have saved myself so much time.  Unless these onions are just amazing dehydrated, I don't know that I will do this again in the future.
And that, friend, wraps up a summer of gardening and food preservation.  With strawberries and cherries frozen in the spring time, then peaches in August, and the garden produce "put up" during the last weeks of summer, I'm looking forward to fall and winter and cooking with these things we grew.
And lastly, while I'm not about to post a picture of myself right now - mostly because I recently got a perm, thinking it would make a great wash & wear hairdo while I'm limited to one hand for a few weeks, nevermind there is nothing wash & wear about it...  I thought I'd look for some old pictures of the first garden Hub and I had.
We rented a small bungalow house when were first married, and the landlords owned a lot with a tilled-up patch behind our house.  They offered it to us to plant a garden if we liked, and we went to it.  Looking at the pictures, I'm amazed at how large it was.  I don't remember if we planted that whole thing, or perhaps just the freshly hoed ground in front of the fencing material behind us. 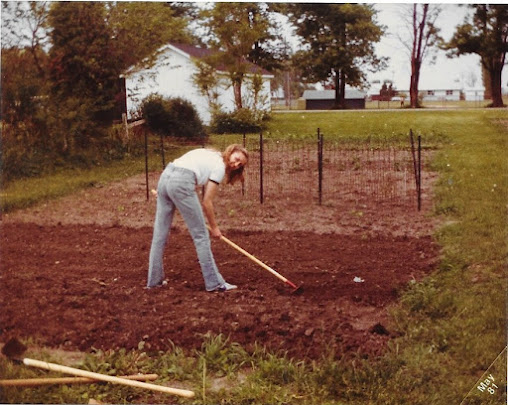 Just for fun, this is 22 year-old me,
and 27 year-old Greg
putting in our first garden. 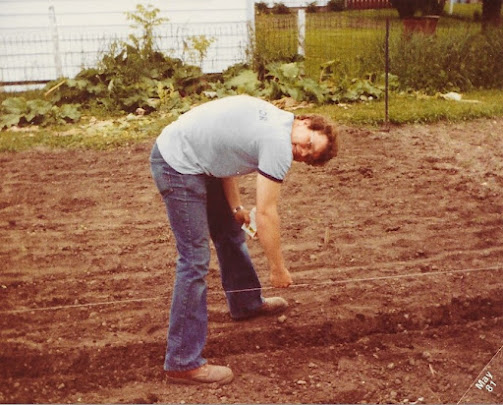 And me with one of my first jars of home-canned green beans: 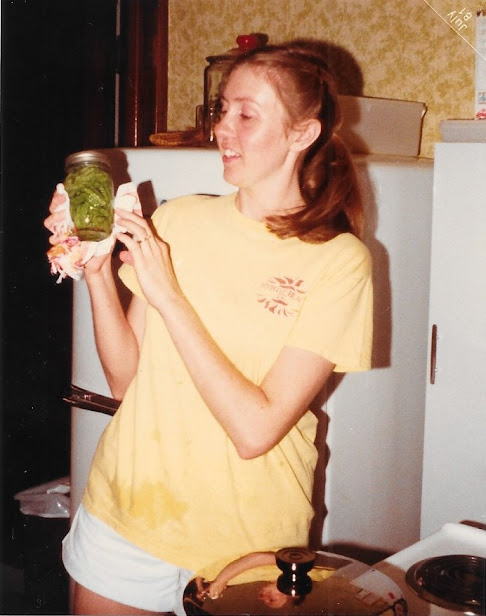 I remember being so proud of those green beans.  And proud of being brave enough to use a pressure canner.   I had never canned before that summer, but I grew up hearing the rattling of the pressure regulator on my mother's pressure canner and that was enough to give me courage to give it a go.  I know now there is a rubber safety plug that would have blown out had the pressure built up too much to be dangerous, but I didn't realize that back in 1981.  The canner in the earlier pictures is the same canner I used in 1981.  I believe it was a wedding gift.  I haven't canned in over 20 years, but even for a 42 year-old pressure canner, I was able to easily replace the gasket and an overpressure plug, and it worked perfectly for me.
This is a wrap!  I hope your summer is winding down nicely, and you're looking forward to autumn.  I sure am.  This is my favorite time of year.
Posted by Becki 9 comments:

About the time when the daylilies were fading this summer, I realized sunflowers were growing in front of them from seeds dropped by our feathered friends feeding at the birdfeeders.  I decided to let them grow and enjoy the show. 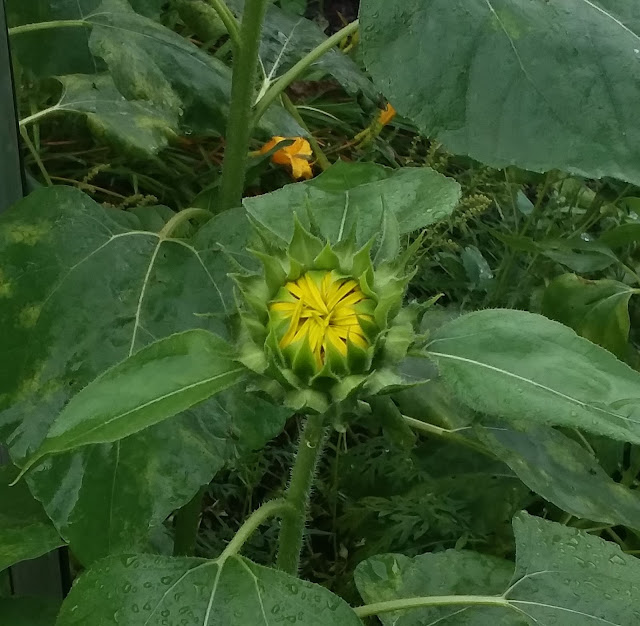 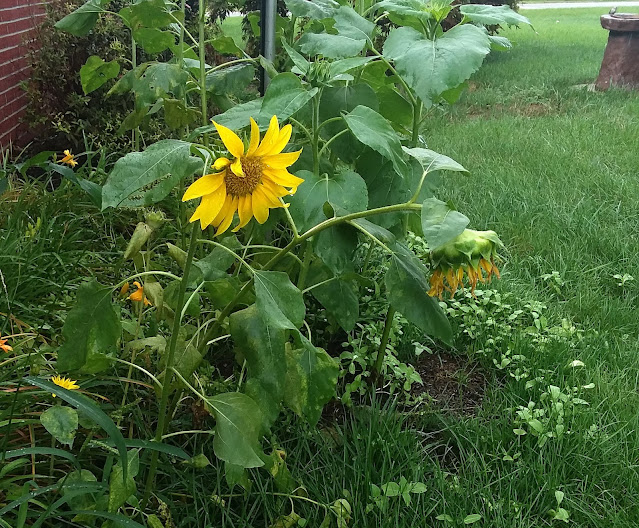 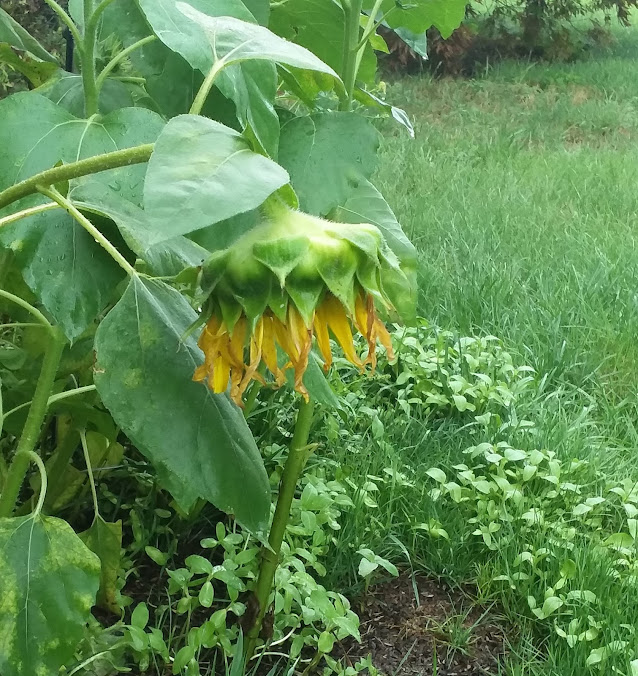 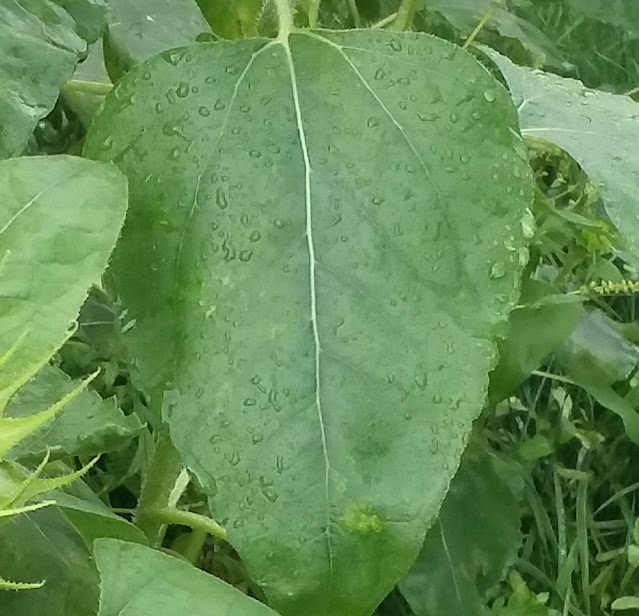 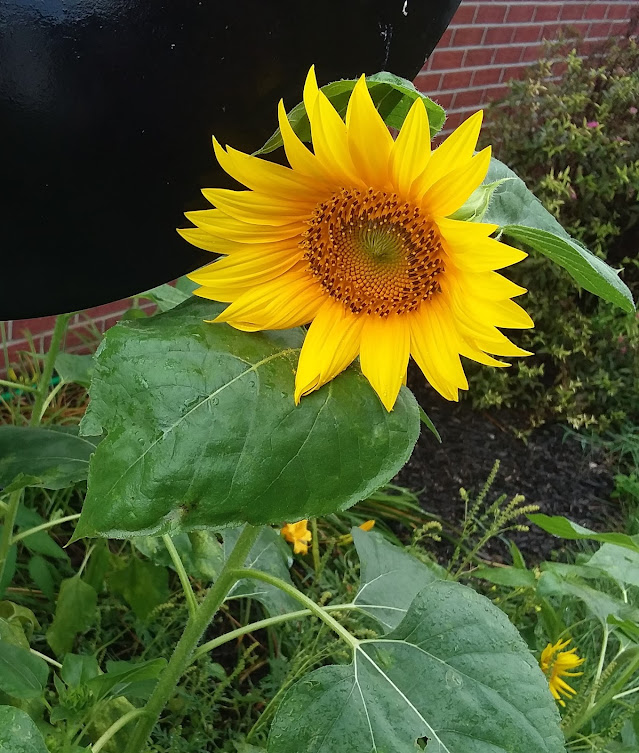 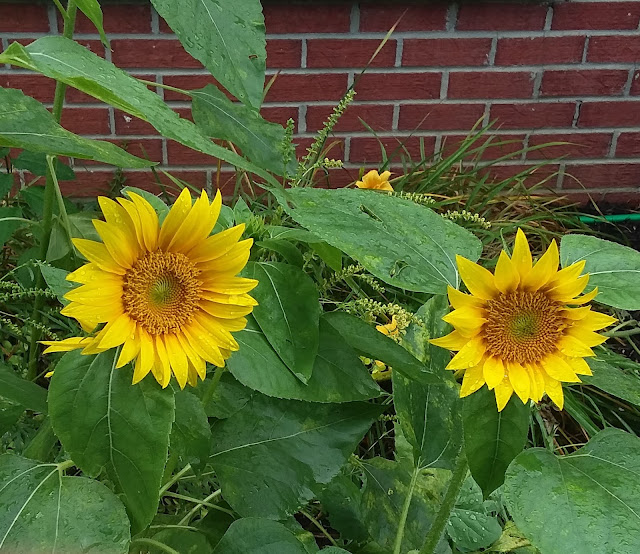 While we temporarily removed the bird feeders for a few months since the birds really weren't needing the seed, it was a fun surprise to watch nature unfold outside our bird-watching window while the birds were finding their food elsewhere.
Finding joy in little things, I have enjoyed watching a different view of the cycle of nature this past year.
Posted by Becki 17 comments:

Email ThisBlogThis!Share to TwitterShare to FacebookShare to Pinterest
Labels: Art in my everyday, Everyday Aesthetics, Flowers

I've had a lot on my plate over the last several weeks and am looking ahead to more of the same into the next month, so anything low-maintenance and pretty gets special mention. 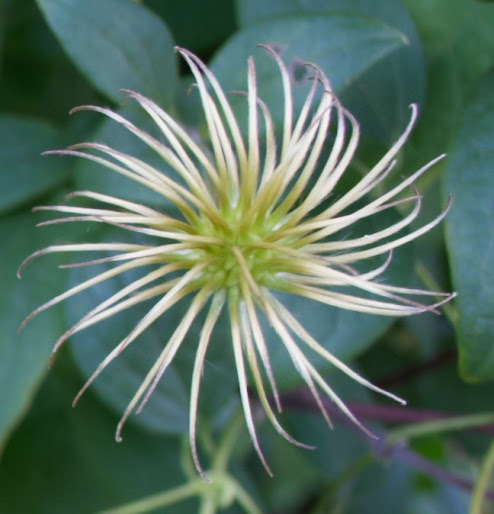 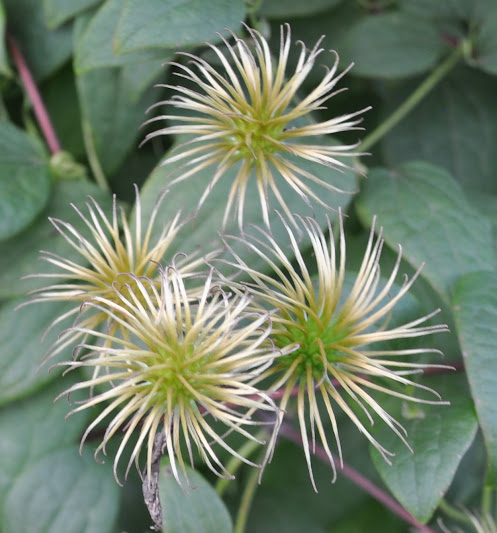 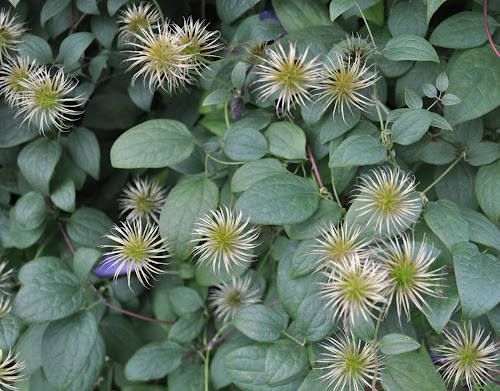 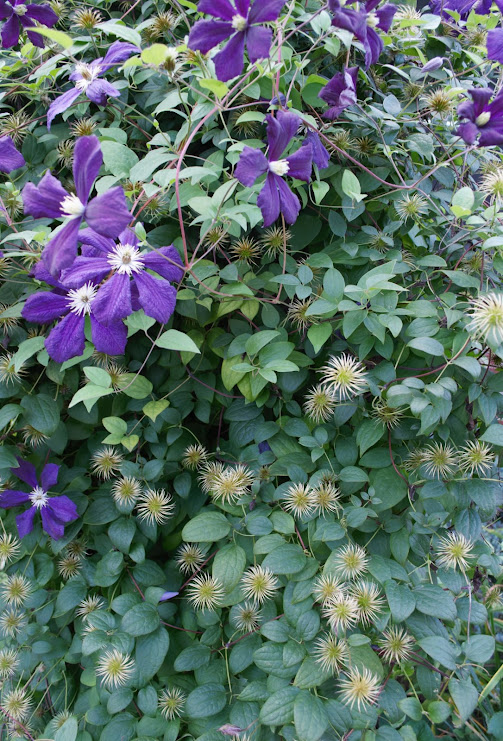 For a plant that went completely neglected all spring and summer, this clematis certainly didn't seem to hold a grudge.
Late in the spring it treated us to a beautiful flush of purple flowers.
Then it seems like I remember looking at it about mid summer and noticed the blooms had all died off.
Then just last week I noticed new blooms and all these wonderful seed heads.
While I love when something so pretty is low maintenance, at the moment I look forward to paying this plant a little more attention next summer.
We'll see if I actually do...
Posted by Becki 10 comments:

Restrooms and Walmarts (especially restrooms in Walmarts) aren't natural blog fodder for me, but this moment was a perfect example of capturing "everyday aesthetics" where it could have easily gone relatively unnoticed.

Walking into the restroom at a local Walmart recently, I didn't expect to be greeted with sweet smells and pretty, fresh flowers. 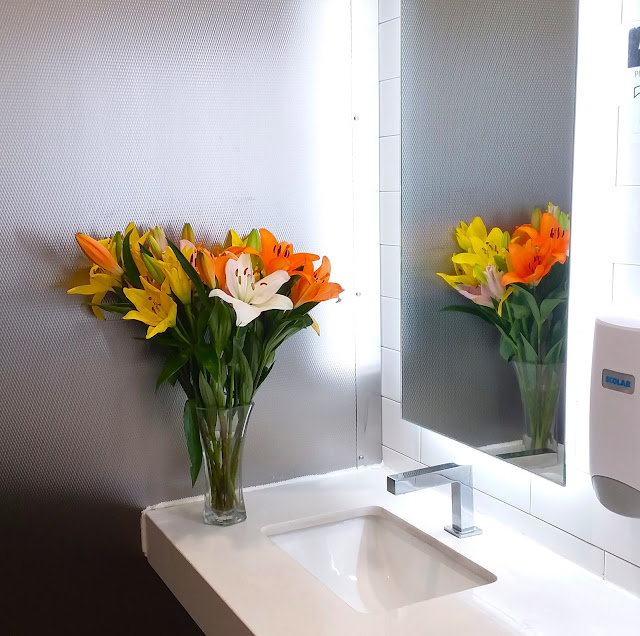 In fact, I'm sure I would have forgotten all about it had I not told myself as I was leaving to turn around and snap a picture.
As I went to get a cart, I stopped and told the greeter how surprising and nice the flowers in the restroom were, and she smiled like the whole thing was her idea, though she said she'd relay the message to management.  Whosever idea it was deserves to know it was a lovely thing.
It was all so unexpected, it honestly had me smiling for the duration of my shopping trip.
~~~~~
Edited to add...  I dropped into this Walmart again recently, and decided to visit the restroom for the sole purpose of finding out if the flowers above were intentional or just a happy, maybe even accidental bit of serendipity.
Turns out it's intentional: 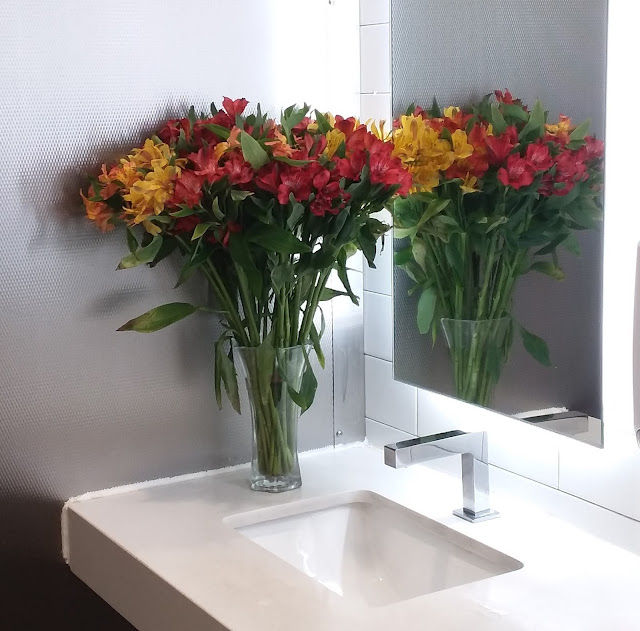