Browsing the web and casually looking for like-minded folks who are pursuing creative endeavors (particularly yarny endeavors), I came upon Small Things' Yarn Along.  A bunch of talented yarn lovers link up to Ginny's weekly Yarn-Along and share what they're knitting or crocheting.   And what they are reading.  Terrific!  Two of my favorite things.

I'm currently crocheting an Arrowhead Striped Blanket.   And one of the books I'm reading is  From the Kitchen of Half Truth by Maria Goodin. 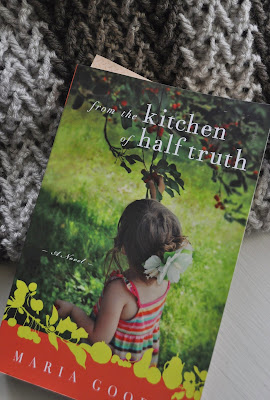 First the blanket:
I'm really liking how simple the pattern is, yet it produces a lovely arrow-shaped stitch (that, frankly, doesn't betray its simplicity). I used yarns from my stash (Vanna's Choice in the colors, Taupe and Linen, and Lion Brand's Heartland yarn in Grand Canyon).  I do like how these colors are working together - even though I can't manage to even edit a picture close to the true colors (it actually has some yellow tone to it).  Oddly, enough, that crochet hook is exactly that color of gold. 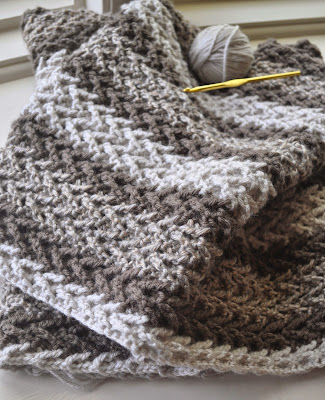 A note on the yarn: I needed to buy some additional Heartland yarn and I found some at my local Walmart. It sells for 3.99/skein. At first glance that is a bargain compared to the 5.99 it sells for at Hobby Lobby (though when I bought it there, I'm sure I used a 40% off coupon). Well, once I started crocheting with the Walmart Heartland, it became apparent that the $5.99 skein and the $3.99 skein were not equal.

I haven't separated out the plied strands to see exactly where the difference happens (whether it's in the number of strands, or the thickness of each ply), but it is clear that the Walmart Heartland is, overall, thinner and maybe more splitty than the Hobby Lobby Heartland I had in my stash. It's not obvious in the finished project, but it is obvious in the crocheting and in the size of the skein after crocheting the same number of rows from the two different skeins. It's not enough to cause me to return the rest of the Walmart yarn, but I'll probably think twice before buying it again.  From here on out, I'll likely choose to purchase the $5.99 skeins when they go on sale or I have a coupon (which makes it a bargain), and skip the $3.99 skeins that only look like a bargain.

Back to the pattern:  While it's labeled an Intermediate pattern, I honestly think if a person can crochet double and triple crochet stitches, they can do this. 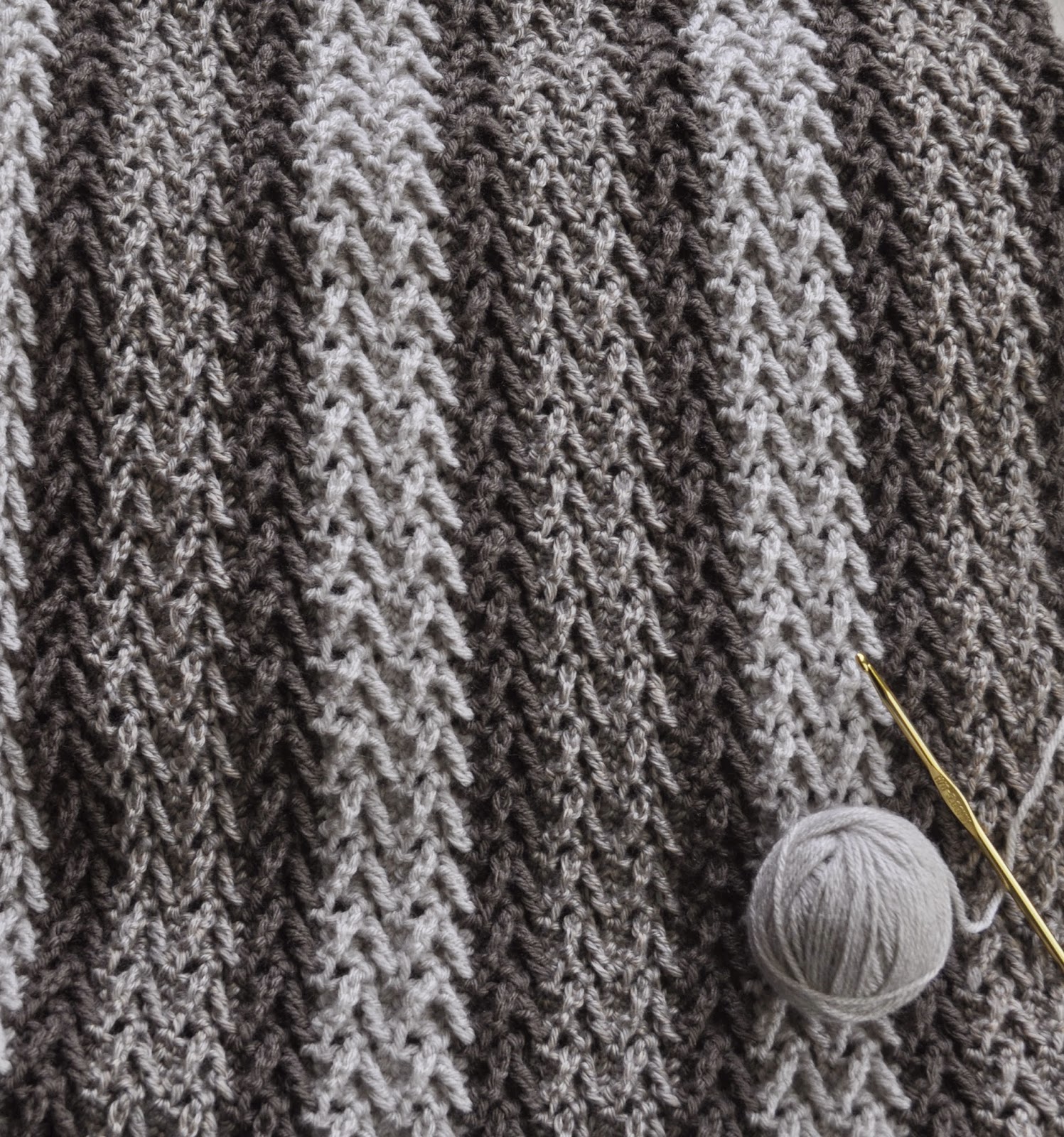 The front of the blanket (see the fun arrows?)  I love the texture!﻿ 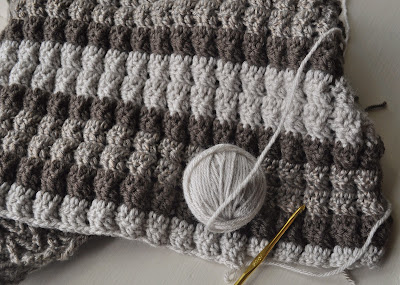 And on the back there's a sort of grid pattern.  Because these are behind the slanted triple crochet stitch, the effect is almost like a bobble.  Almost a bobble, but not quite.  I really like the back, too, for its textural effect.

Honestly, the only really difficult part of following this pattern is remembering which side of the blanket I'm working on. Not that that's particularly hard (as you can see, the front and the back look completely different from each other), but it's such no-brainer of a stitch (once I got it down) I sometimes forget which side I'm working on and it can be a row or two before I catch the mistake. Argh!  I don't know how many times I've caught an arrow on the back and had to rip out a row or more.  I started this blanket a week and a half ago, and I'm sure I'd have been nearly finished by now if I didn't keep doing that. Sigh. I must pay closer attention.  Or at least check each row carefully before proceeding to the next.

And the book?  I'm about 1/3 of the way through it, and to tell you the truth...I didn't think I was going to like this when I first started reading it.   It starts out with just a bunch of silliness that sounds like a child's make-believe story.  Not what I was looking for.  But it didn't take reading much beyond the first chapter before I was hooked.  And realized that the silliness and even feeling frustrated by it are important.  So don't let it put you off.  Meg goes home to help care for her dying mother (who, at times, seems more alive than anyone) and Meg's nonsensical past begins to take on a new charm.  And I'm beginning to believe all that nonsense at the beginning may all come clear before the story is fully told.   Honestly, when I sit myself down, it's hard to decide whether to read or crochet!  Again, I'm only part-way through the book, but so far I think I recommend it as an interesting read. 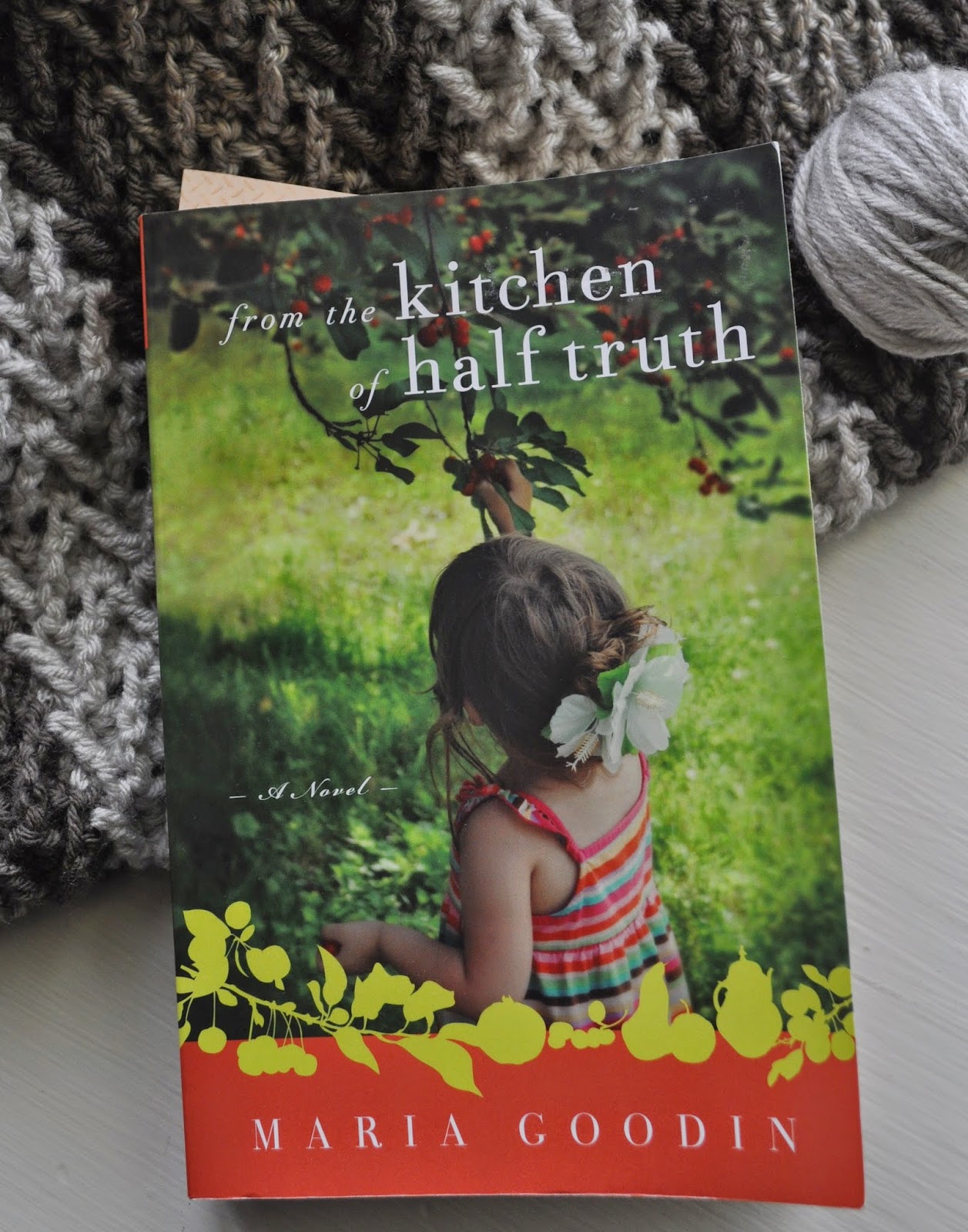 Email ThisBlogThis!Share to TwitterShare to FacebookShare to Pinterest
Labels: Crochet, Yarn, Yarn Along


I had a little secret.  A couple months ago I crocheted a baby gift for a young friend, but since her baby shower wasn't until this month I wasn't able to show what I was making until now.    Here's what I was working on back in February: 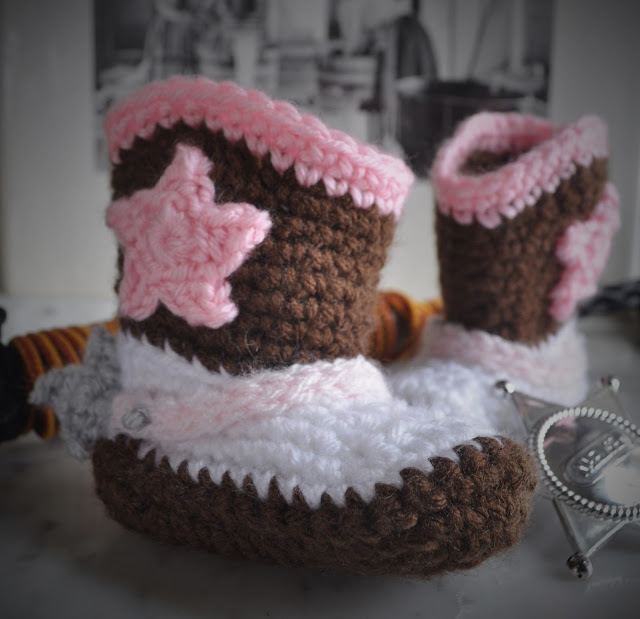 I used this pattern from Crochet Crowd, but eliminated the little "heel".  For styling these, I want to give credit to Kim at The Little Red Farmhouse for originally creating these booties with all the details, but she has removed the post where she featured these.  I do see elsewhere on her blog that finished booties are available for purchase, though.

The details were a bit fiddly and having no pattern available I had to figure everything out (everything but the booties themselves).  The strap was easy enough, but I found a star pattern online and adapted it for the stars on the sides and the half-spur.   Did I say these were a bit fiddly?  They were fiddly to the extreme - oh my - but it was satisfying to figure out.  And I was really pleased with the end result.

The baby shower was in another state so I wasn't able to attend easily.  I packaged them up with some pretty pink burp cloths, tied up the girly box with a luscious pink ribbon, and off they went. 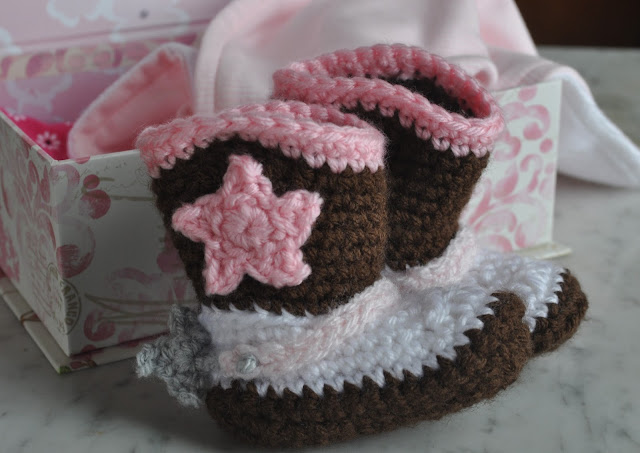 I know it looks like a simple gift, but every stitch was made imagining the mother-to-be's delight.  And I heard they were a hit.  I don't suppose it gets much better than that.  ;^)

﻿
Posted by Becki No comments: