I had great intentions of making my mother- and father-in-law a crocheted blanket for Christmas.  I wanted it to be special.  After giving it thought and looking at many pictures of crocheted blankets, I found the perfect pattern (in a book I did not own, but I found on amazon).  I decided I wanted it to be done in a neutral color and silver seemed to be a great idea.  But for some reason the perfect shade of silver kept eluding me.  Finally I took a chance on a shade in KnitPicks Brava.  I ordered the yarn and in early December it came.   Plenty of time, I thought.

The stitch pattern is called Ocean Swells and the book it is found in is:  Crochet: The Complete Guide by Jane Davis. ISBN: 9780896896970.  This is a book of stitch patterns (not patterns of finished objects), so figuring out how to get the stitch pattern into a full size afghan took some thinking and some calculating, then finally crocheting, and ripping out, and crocheting again.  At last, I got it down.  It was exciting to watch it grow. 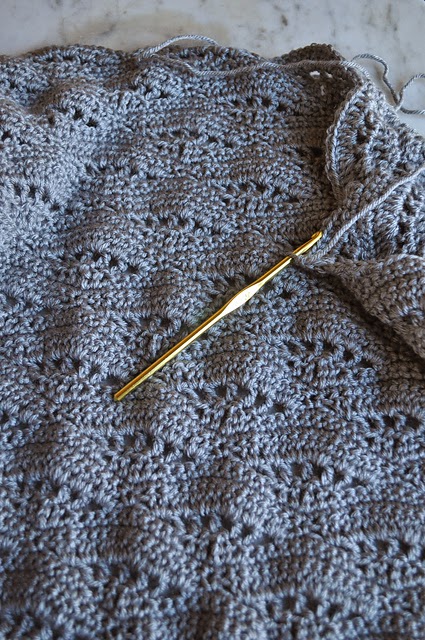 Well...as it turns out, December is a terrible time to begin a large crochet project of a new pattern.  Especially if the pattern is the least bit challenging.  Especially if you want to give it as a Christmas gift.  But I gave it all I had.  For weeks, I crocheted.  And ripped out mistakes.  And crocheted some more.  It was, I think, less than a week before Christmas when I finally realized that I could crochet every free hour I had and I was not going to be able to complete this blanket in time.  So I quit. 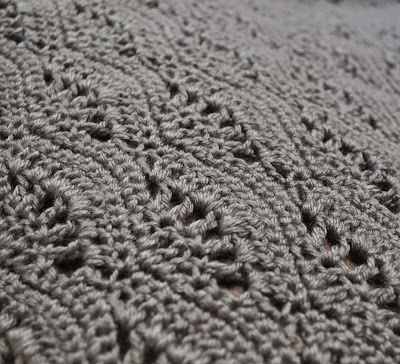 Well...I didn't exactly quit, but I freed myself of the expectation that I would finish in time for Christmas.  I took it slower and enjoyed the process instead of frantically crocheting my fingers off.  And I enjoyed that last week before Christmas - promising never again to put off starting such a large project until December.

I finished it after the New Year and decided that it would instead, make a great birthday gift for my mother-in-law. Good thing I had let go of the idea of it being a Christmas gift, because much to my dismay it needed blocking when it was finished.  I've never before had to block an afghan so I don't know whether it was the Brava yarn or the pattern that make this afghan not lay smoothly.   While I've blocked small objects, blocking a blanket was new to me.  And of course, I procrastinated.  Once I bit the bullet, though, it wasn't so hard.  It was just big.  And blocking did the trick.  YAY! 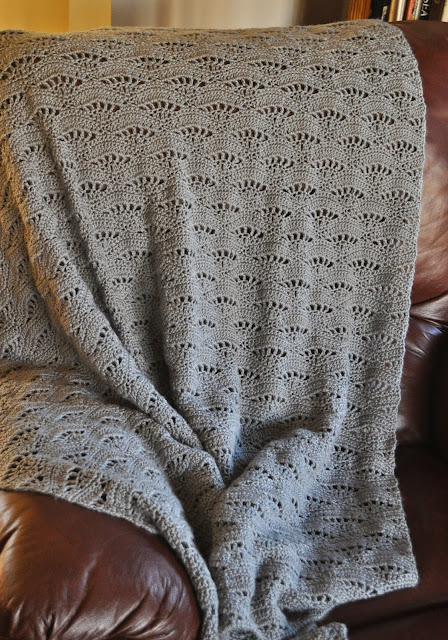 Yes, I know it's not laid out smooth in the picture, and the pretty top and bottom edges don't show, but blocking really opened up this, almost, lacy pattern.   Someday, maybe, I think I'll try this pattern in another yarn to see if it behaves differently.


Finally, it was ready to go and I'm happy to say it was a hit! 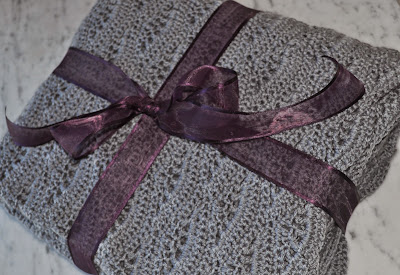