Having graduated our youngest I thought I'd share some highlights of Ben's high school years - which largely included being part of the SEEK Drama Troupe.  SEEK is a high school co-operative made up of homeschooling families from all around central Indiana.  Its emphasis is on teaching high school level academics, but Drama, while less academic than some offerings, is possibly its greatest treasure - though admittedly I may be bit biased since I've been privileged to see behind the scenes of many of the plays produced.

In addition to some minor productions at church or in smaller homeschool group settings, Ben participated in six major high school drama productions.  While my role has been minor, I've been thankful for the opportunity to work behind the scenes and see this wonderful (sometimes crazy) world of collaboration that had before been a complete mystery to me.  I've worked in make-up, assisting the director, and sometimes just taking photos.  While the intense experience of working on high school dramas is now behind us, it's all been a great learning experience for Ben, and while at times stressful, mostly great fun for me.

For some reason, we don't have any good pictures of Ben's first drama, A Christmas Carol, but Ben made a most extraordinary ghost of Jacob Marley in December of 2010: 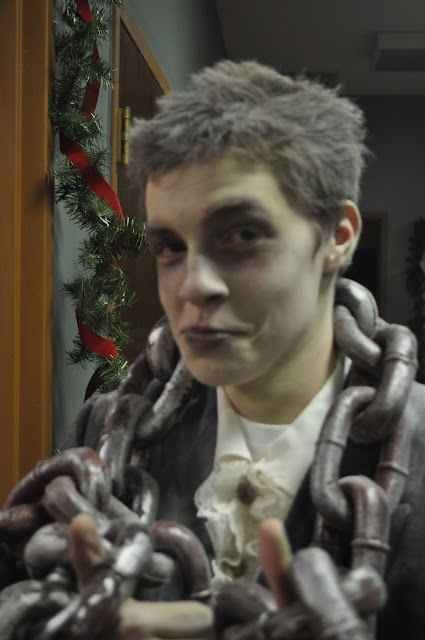 And here he is, after the play, with Grandpa & Granny B, and Aunt Amy: 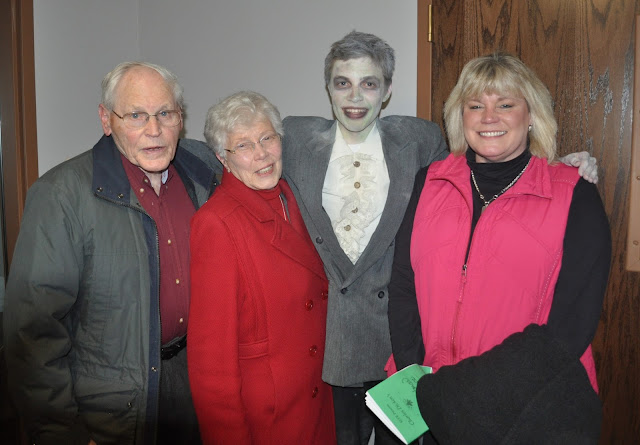 Determined that we wouldn't find ourselves without pictures of future dramas, I became an unofficial house-photographer of the rest of the plays Ben was in.  No one asked me, but neither did I ask if I could do it.  That's the way we homeschoolers roll sometimes.

I soon discovered how difficult it is to get good pictures in a dark room when everyone I'm trying to take pictures of keeps moving.   To do this really well, a full practice needs to be devoted to picture taking and actors, at times, "frozen" for shots (which I have since learned is how the professionals do it.

Ah well...in spite of the difficulties, and my amateur-ness, I persevered - taking a lot of terrible shots, but by the time Ben's drama days were coming to close I finally had begun to get this picture taking thing down.

Or gotten really lucky a time or two.

In the fall of 2011, Ben played Oberon in a Midsummer Night's Midterm. 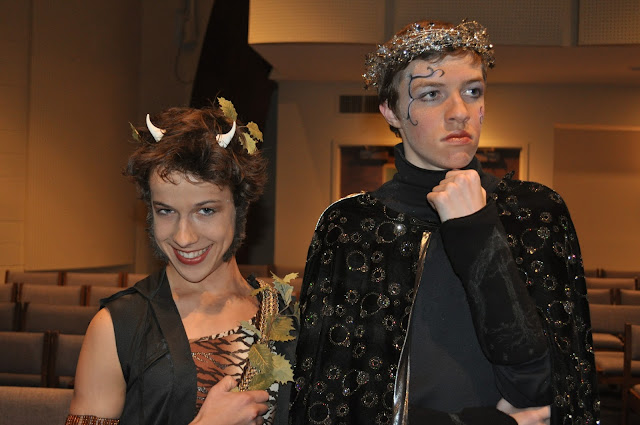 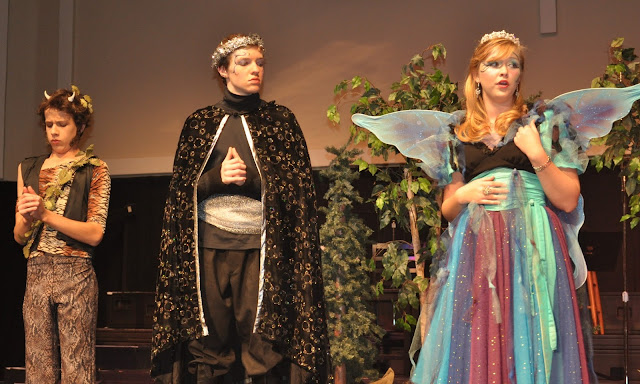 In the spring of 2012, Ben was in Somebody Say Glory (a play written about five young missionaries who were killed by the Ecuador Aucas in 1956 - that's a woefully inadequate summation of the story, but so that I can get on with the pictures that will have to suffice for now).   Ben played missionary, Jim Elliot. 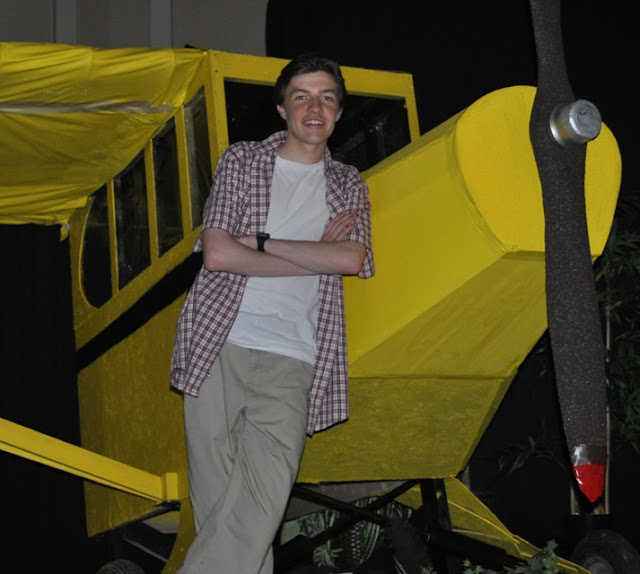 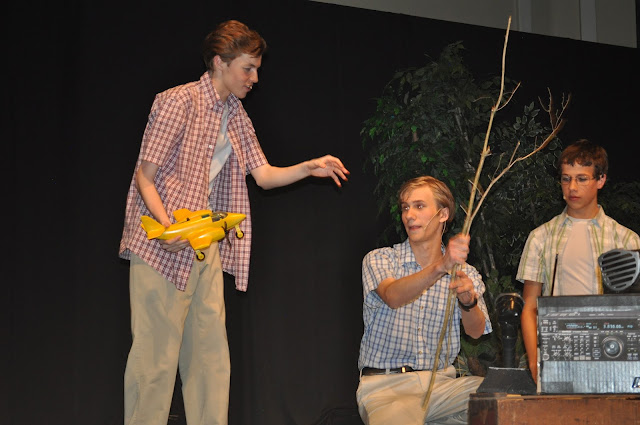 The next play Ben was in was in the Spring of 2013 when SEEK put on the hilarious drama, The Mouse That Roared.  Ben played the character, Benter: 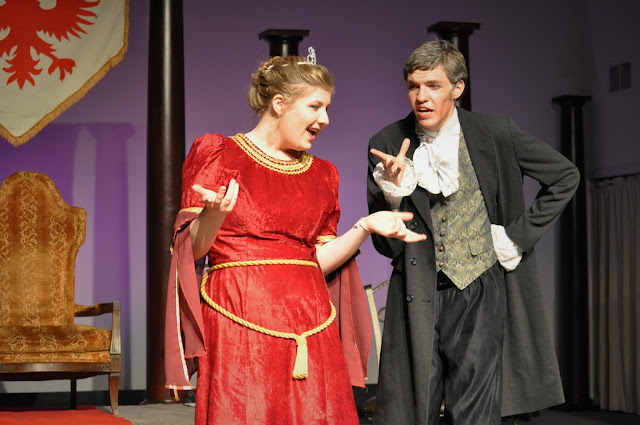 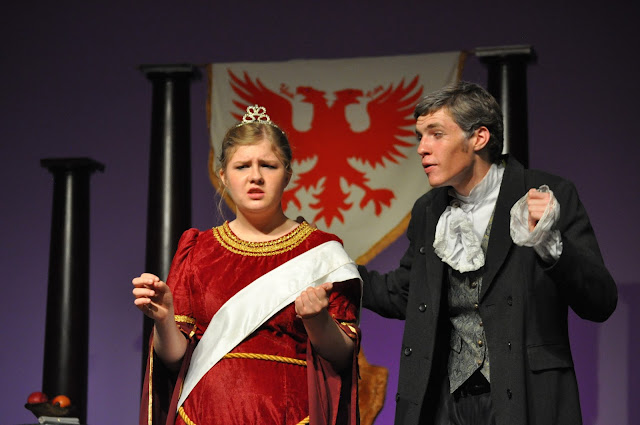 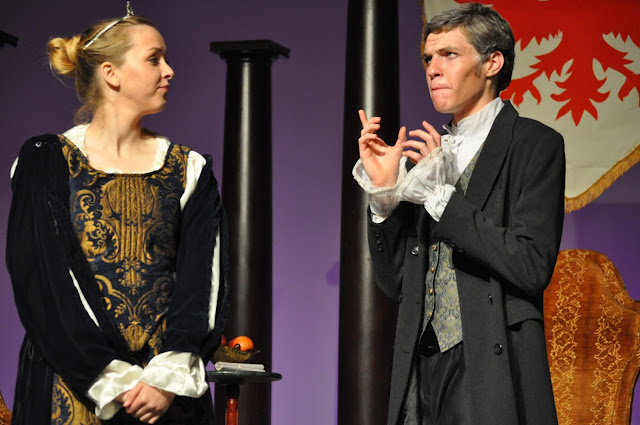 
In the Fall of 2013, the SEEK Drama Troupe put on a rip roaring melodrama called The Saga of the Golden Horseshoe.  Ben took on the role of Professor Roseloa (a detective in the disguise of a fortune teller): 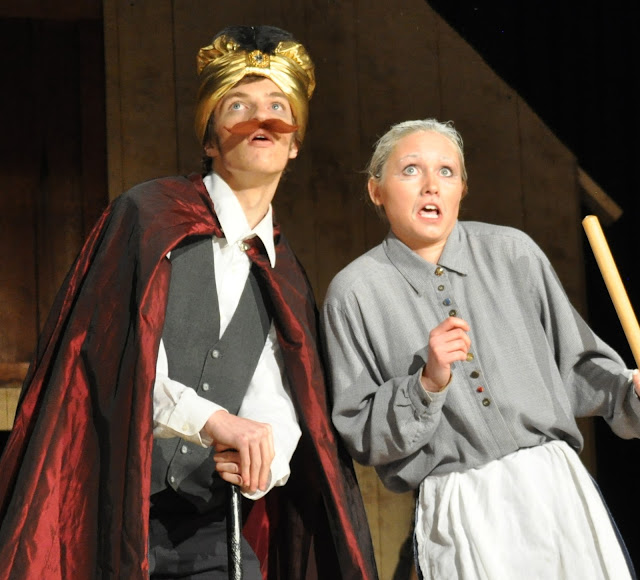 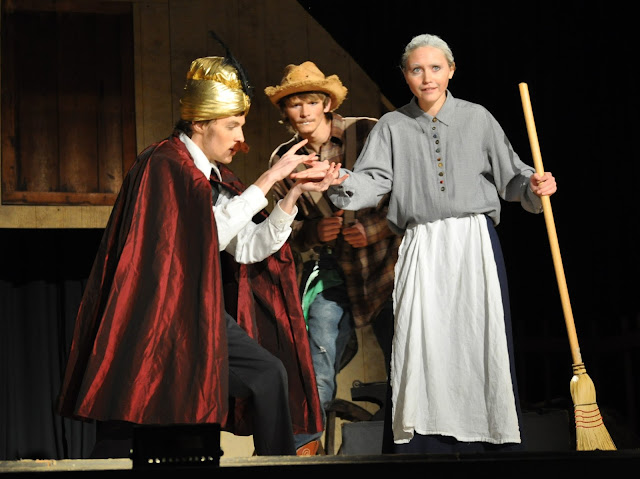 This play was performed in the old Crump Theatre in Columbus, Indiana.  The theater is purported to be haunted and I can attest to it being a totally spooky place to work in, but it was a fabulous venue for this particular production.  It was also cold.  During the weeks in November the kids had no heat for their practices and they soldiered on admirably. 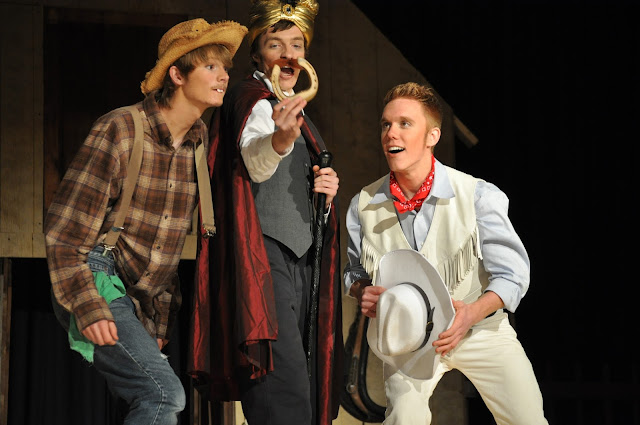 And Ben's final high school drama was an adaptation of Cinderella called If The Shoe Fits.  Ben played the scrappy Python, leader of a misfit gang that was, in the end, defeated by the court's "ladies in waiting". 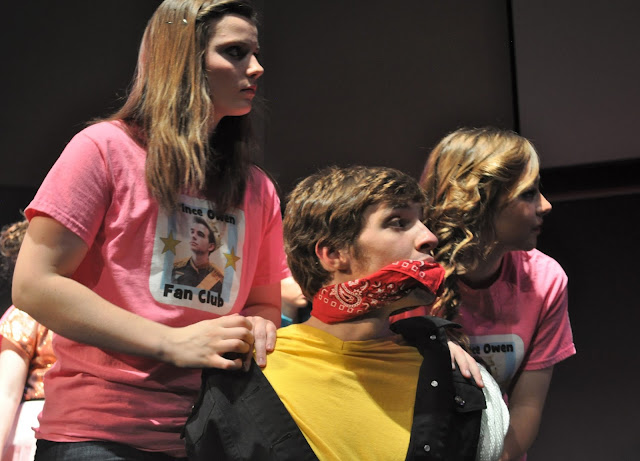 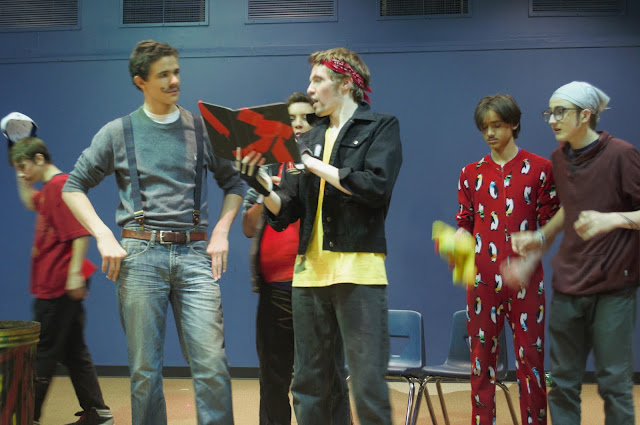 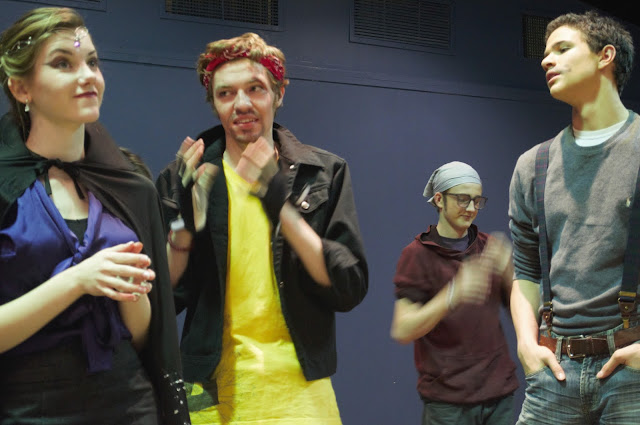 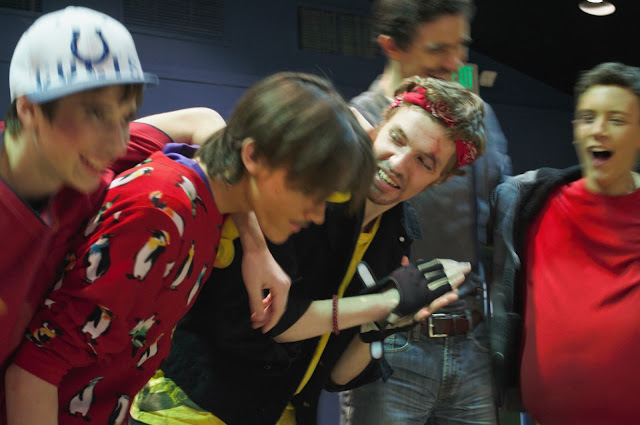 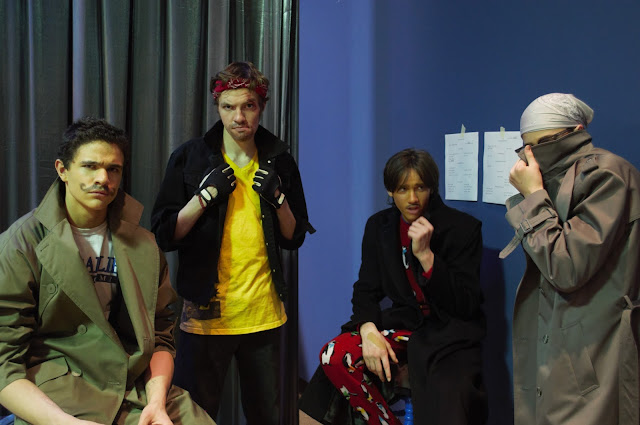 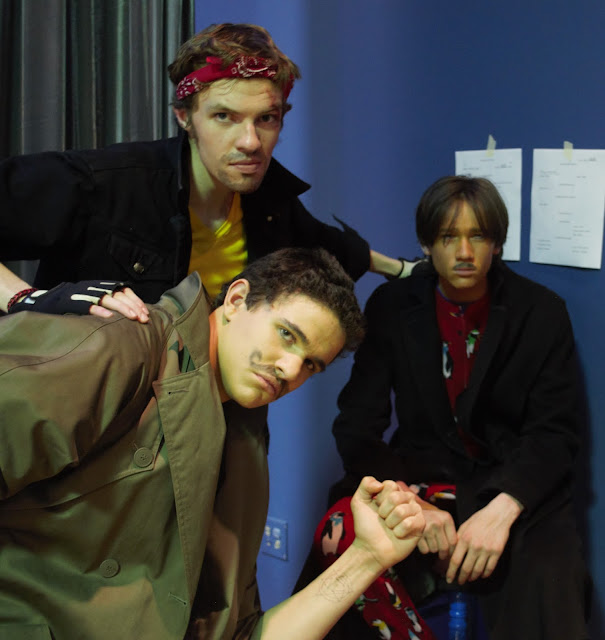 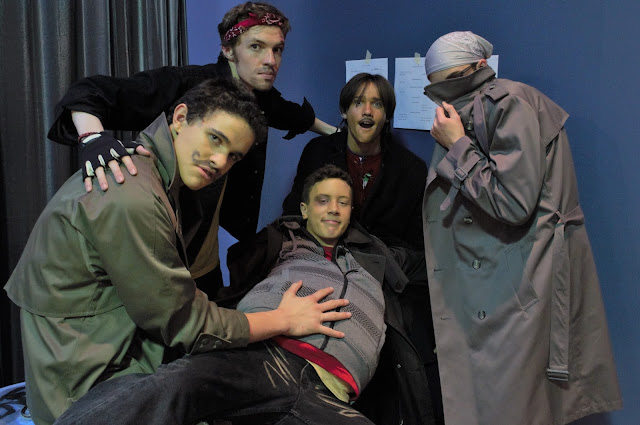 There are lots more pictures, but these give a glimpse into the fun SEEK drama was for Ben.  Lots of life lessons learned and friends made.  And an hugely valuable part of Ben's high school years.  We will long be grateful for the directors and other adults who work tirelessly with the students to produce some amazing productions.
Posted by Becki No comments: