The more things change, the more they stay the same.... 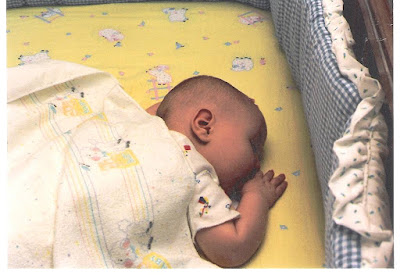 I had so much fun writing this and sharing it with friends on a homeschool forum I decided to put it here with some pictures to enjoy another day.

I was reminiscing recently about how the way I laid my infants down to sleep at night changed with each baby (they were about three years apart.)

The first baby (Nathan) was to be laid on his tummy (which worked lovely, though it was a bit of a trick to not wake him up after I had nursed him to sleep). In the picture above you can see how content he slept with his thumb securely in his mouth propped by the bed underneath him. 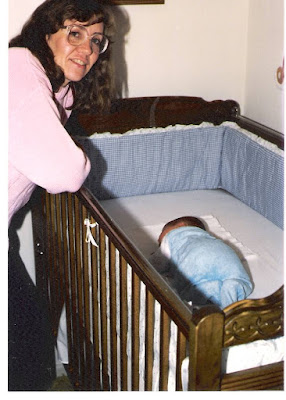 This photo is further documentation that I obeyed the baby sleeping on the tummy rule (of 1989) and that I once had dark hair - though I don't think it ever quite that dark (and if it showed more of me, it would also document that I used to be downright skinny.)

By the time the second child (Joel) was born it was determined that babies lying on their stomachs could possibly suffocate in a wrinkled sheet or under their baby blanket, so infants were now to be laid on their backs. I was horrified at my ignorance with my first child and thought regretfully of all those times I'd woken him up trying carefully to put him down on his stomach. But I decided my overriding attitude should be one of thankfulness that he had survived.
I quickly learned, though, that babies laid on their backs also often jolt awake when slipped out of their mothers' warm arms onto cold sheets, but alas....I did not fail to obey this new rule until baby #2 managed to turn himself over and I knew I was now released from this burden of putting him down "correctly".

I evidently didn't document the child sleeping on back technique, but I was relieved to find many pictures of Joel sleeping contentedly: 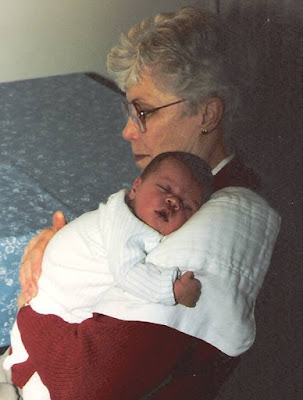 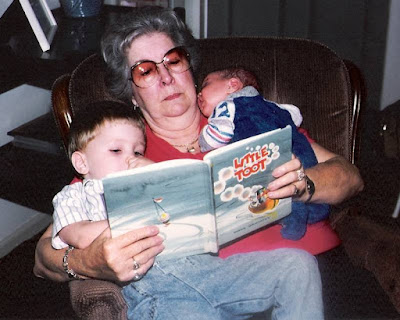 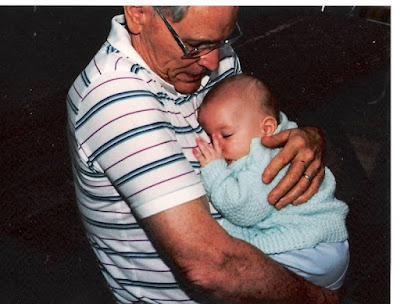 Nestled into Grandpa B 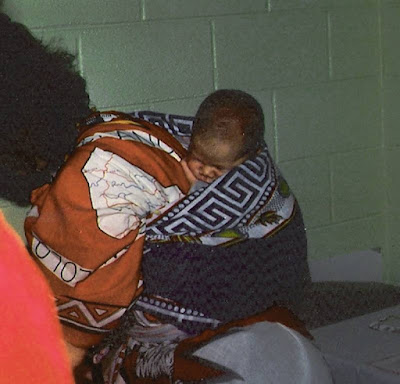 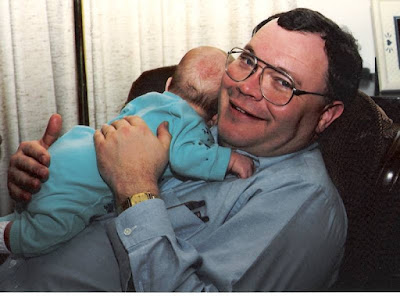 And Greg tried to get Joel (and many other babies) to sleep with his "Double Thump". You know...come to think of it, maybe it's not that we were all that skinny, but rather our glasses were all that BIG.

Then when my third son was born imagine my surprise to learn that babies were to be put to sleep on their sides. The nurse actually told me this with a straight face, but when I laughed out loud she explained to me that babies laid down on their backs sometimes drown (on their own saliva? spit-up? - it's been 13 years, so memory fails) so now they were to sleep on their sides. Being corrected by someone who was so obviously "in the know" and I was a mere mother three times over, for some reason I decided I'd better heed the nurse's instructions. (Only the Lord knows how the second child survived as he was a big spitter-upper). 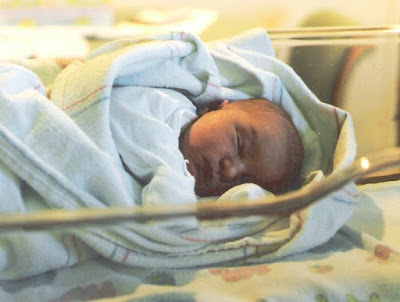 Sure enough. I found this picture of Ben in his hospital bassinet sleeping peacefully on his side.

So after arriving home and propping baby Ben up against the side of the crib I thought, "The only way this child is going to be guaranteed to lay on his side all night is to strap him to the railing!" Something about that went against my mother-nature, (and besides...I didn't have anything to tether him to the crib with and that beautiful soft baby bumper was in the way even if I wanted to do this unnatural thing).

Not to be undone by what appeared to me to be a bit of a mystery, I decided to put him in the middle of the crib, roll up a blanket for the front of him and a blanket for the back. It appeared to work, so I propped him up thus to spend his first night wrapped snugly in his baby blanket, semi-suspended like a single book between two book ends - hoping the poor thing didn't develop a crick in his neck.

I worried all night that he might suffocate if he somehow rolled over forward in his sleep or drown if he rolled backwards. After that restless first night I decided to just lay him down however the mood struck from then on (right side up or upside down) and trust that down through the ages children had survived (and, sadly...died) no matter how their loving parents laid them down; and regardless of what I did to care for mine properly in my awake hours, they were entrusted to their guardian angels during the hours the rest of the household slept.

Twenty years later, I am happy to report that they all survived. And having solid (some might say fat), healthy babies, I was a doubly blessed momma because they all were sleeping through the night by 4 weeks of age. One of them began sleeping through the night at 2 weeks. Incredible, I know and I'm sure the baby doctors and nurses would have something to say about that too. I LOVED the baby stage and found it most enjoyable when I relied on my mother instincts and common sense and put the experts in their proper place.

It must have been during this period of having my babies that I firmly grew suspicious of how "expert" were the experts. By the time my babies reached school age, I was oh - so ripe for homeschooling.