For a change of pace from making hats, I crocheted a pretty sunflower "doily" yesterday: 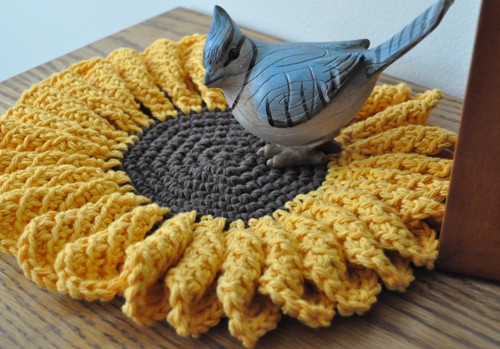 Made with Peaches & Cream worsted-weight cotton in the colors brown and gold, I made mine a few rows larger than the designer's and it measures about 9.5 inches across.

If you're interested in making your own, here is the video tutorial I used:

Otherwise, it's still looking a bit like a hat factory around here! 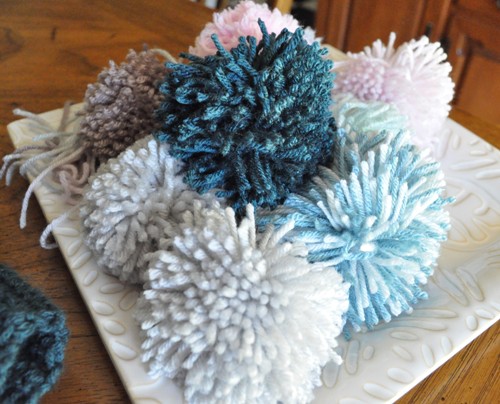 are gathering and awaiting their final trimming in order to be added to these: 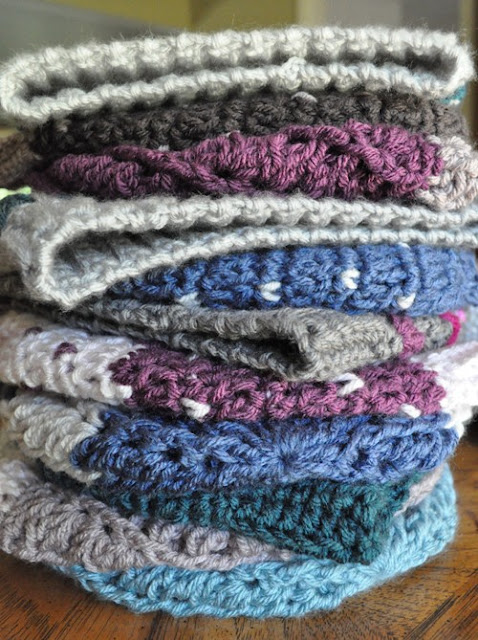 I think I'll make just a few more hats this week and then I'll wrap up this endeavor.  At the moment, I have 13 hats crocheted and while it's tempting to set a specific goal, I think I'll just be done when I'm done.  And I think I'll be done next Sunday.  ;^)

A busy Sunday came and went and I was mildly inclined to skip this week's Year of Projects' post, but at the same time I wanted to show what I'm currently working on.  So here I am - even if a day late.

It's nothing fancy, or anything, but here are the latest hats I've crocheted for donating to a hats (gloves and scarves) drive for kids that will be happening in a month or so: 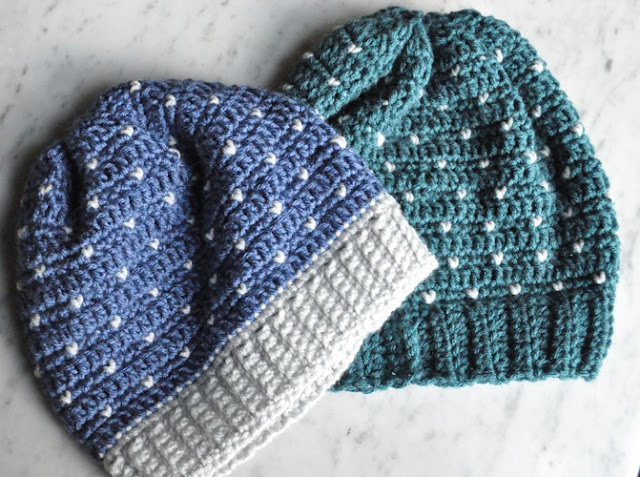 The pattern is called Snowfall Slouchy Hat by Bethany Dearden.  While you can find the pattern for free at the link above, Bethany has some excellent  video tutorials of several hats she's designed and I highly recommend them.  Here is the video I used to make these hats.

I'll be making more of these Snowfall Slouchy Hats and I think I'm going to try at least one other of her hat designs before I wrap up my hat-making endeavors.  I'm thinking of making a bunch of pom-poms in one session to top all of my hats, so when I next show these off, they may look a little more finished.


To see what other Yoppers are up to visit our group on Ravelry.

This post may look like I've been really busy crocheting this week, but really what's pictured are items mostly crocheted over the last few weeks, and only needed a little work to finish.

First, I finished a couple of Scalloped Potholders: 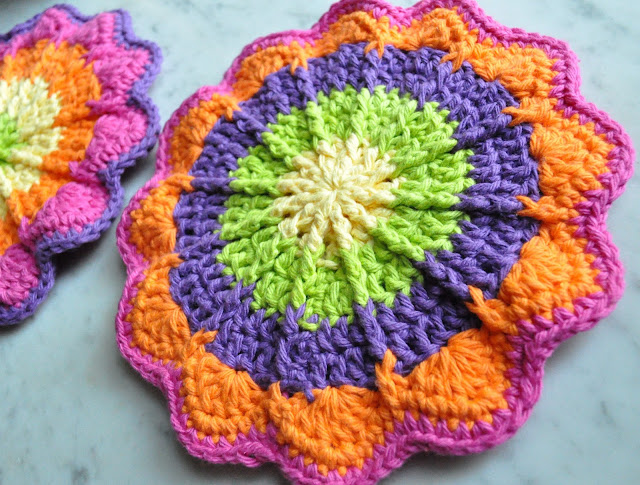 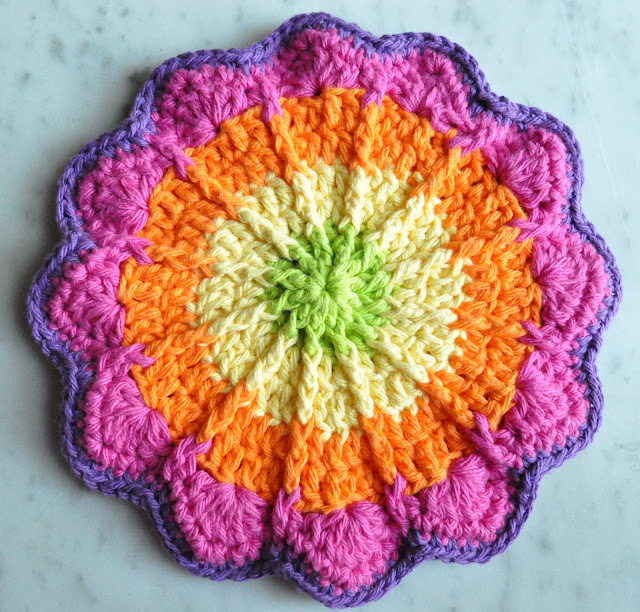 This is a very well-written pattern that I recommend.  These potholders are two-layered and pretty thick made with Lily's Sugar 'n Cream.  Made with a thinner cotton yarn, one layer might make a nice washcloth, though.

But I like these as potholders.  I'm thinking I might make a couple more to go with a new flowery tablecloth I recently found on clearance (at Meijer), but these two are going into my Potholders For Posterity collection.  :)

Moving onto other things...  I'm happy to say I finally had success at making a couple of child-sized hats.

First, to go with this simple linen stitch scarf: 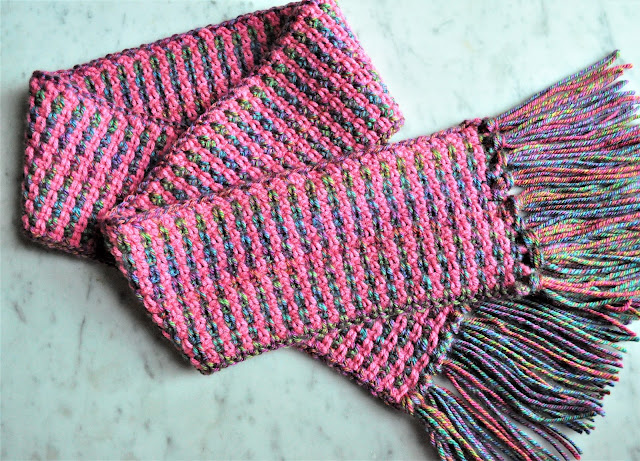 I finished this child-sized Divine Hat: 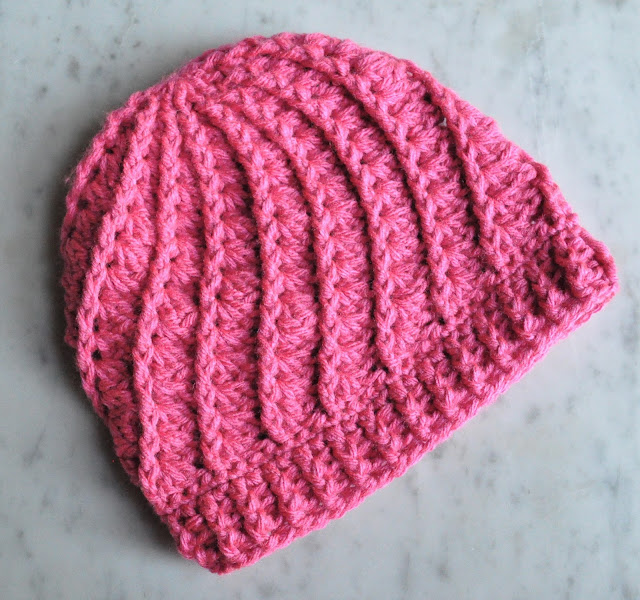 And then, this weekend, I made a Stepping Texture Hat: 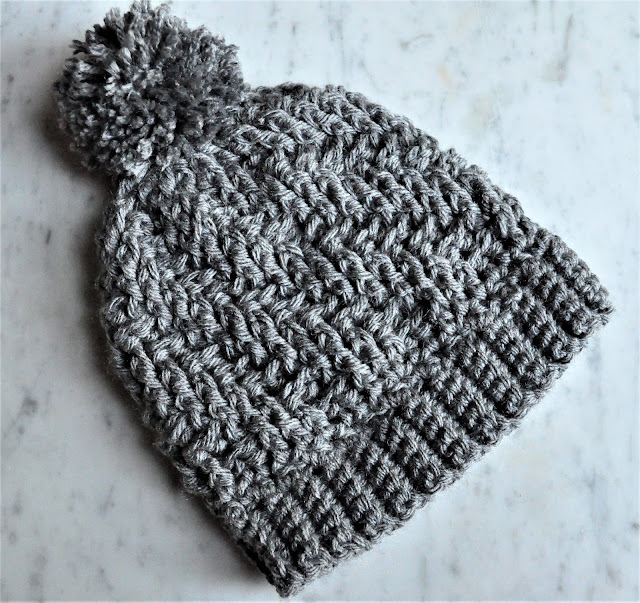 I found the chunky yarn too thick for making a slip-stitch ribbing that the pattern gave instructions for, so I made a ribbing using single crochets in place of slip stitches into the back loops of the row below.  Making my ribbing different from the pattern meant I also needed to adapt the beginning of the body of the hat.  It wasn't difficult, but I crocheted a row of sc's, sometimes adding sctog's until I had a total of 40 stitches I could work Rnd 1 into.  The instructions are clear and I finished this hat in just a few hours.  The stitch pattern becomes intuitive after a few rounds, and again... it's a well-written pattern that I highly recommend.

I saw a window of opportunity and jumped on a house project this past week.  That, and otherwise trying to keep up with the stuff of life has caused me to not even give much thought to crochet - at least since mid-week.

Early in the week, though, I finished a child-sized scarf (no pattern referred to, it's just a simple linen stitch), and when I had quite a bit of yarn left over I searched high and low for a child's hat pattern that I liked and that fit the yarn I had left.  I tried a couple of different patterns, but they either turned out way too small or too large.  I was beginning to feel kind of frustrated.  But then, this afternoon I decided to give the Divine Hat a try.

So far I love the stitch pattern in this hat, and the resulting swirling ridges.  And it's working up so fast!  I didn't want to hold off posting this week, so I took an in-progress picture to share.   Laid out like it is I'm thinking it's kind of large, though.  Definitely larger than I thought it would be. 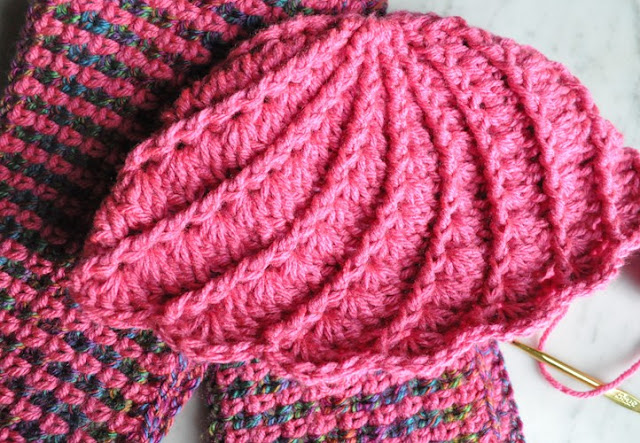 Another row or two and it will stop increasing in size, and I'll start the ribbing or whatever kind of edging I'm going to use.  But I just don't know about this.   The pattern is easy and works up fast enough that I will readily rip it out and make it a second time using smaller hooks, if I need to, but I'd really love to get this set finished.    Hopefully, next week I'll have a finish to show.

I do like the pattern, though, and I think I will make more of these.  I'm sort of on a quest to make some hats and scarves to donate this fall when the hat, scarves and mitten drives come around.  I'm hoping this hat is a success because a pretty hat produced from an easy pattern sounds like a winning combination to me!   :)