Last week I found myself  disappointed with the beginnings of a knitted scarf done in Caron Cakes yarn, but this week I found a project that is perfect for them: 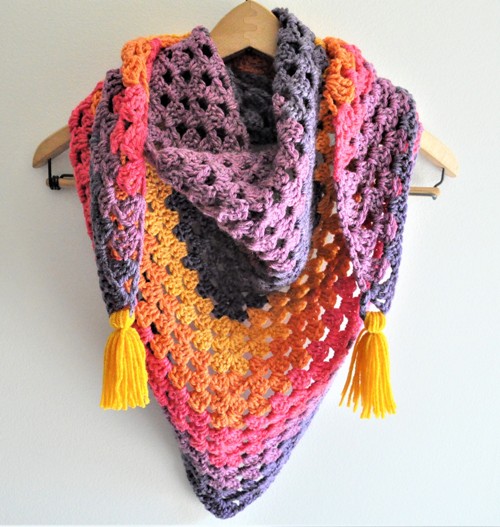 A Granny Triangle Scarf in the colorway, Funfetti 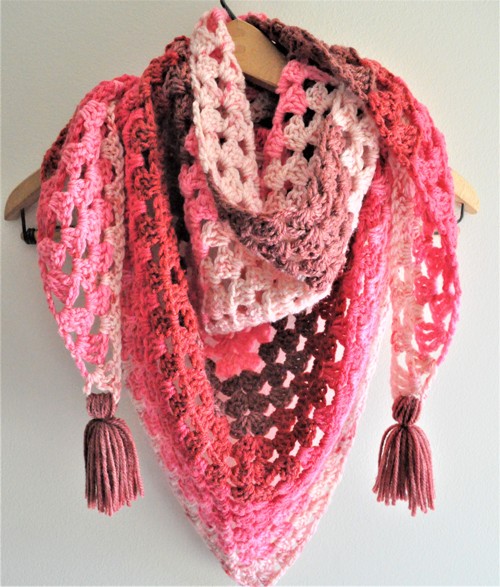 And another in the colorway, Cherry Chip

There is a mistake in Row 2 of the pattern - basically, there's an extra stitch sequence - that's pretty obvious as you're working it, but still...  it stopped me for a bit as I sorted out if the mistake was mine, or in the pattern.  I mention it in case anyone goes directly from here to the pattern - I figure if I can save someone a bit of time second-guessing their work, it's worth a mention.

The pattern uses one skein of Caron Cakes yarn.   An easy peasy project that makes a very satisfying finish!

Email ThisBlogThis!Share to TwitterShare to FacebookShare to Pinterest
Labels: Scarves, Year of Projects 2017-2018

A simple and sweet baby blanket... 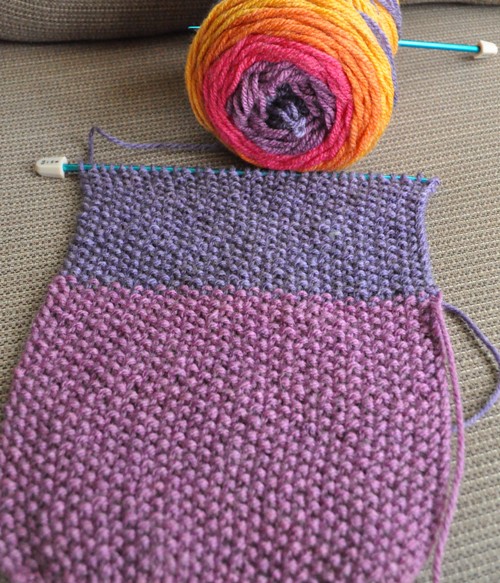 So early yesterday I declared the scarf frog-worthy and I set my mind to finishing the Corner to Corner baby blanket I had begun a week or so ago.

It's a simple blanket, but I'm satisfied with how it turned out: 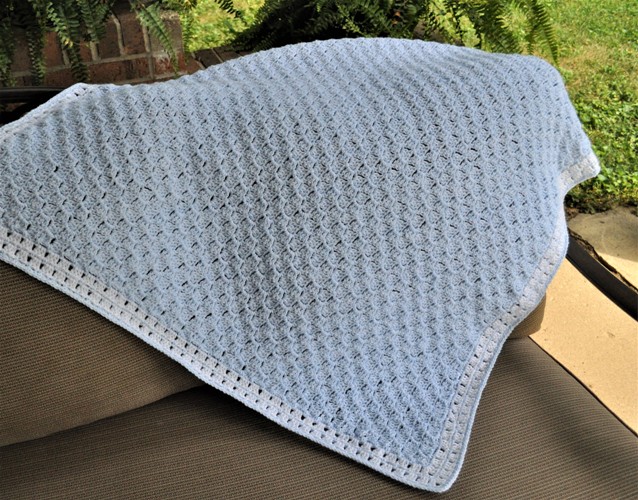 And that's all she wrote (and hooked) this week.  To see what other Yoppers are up to, visit our thread on Ravelry. 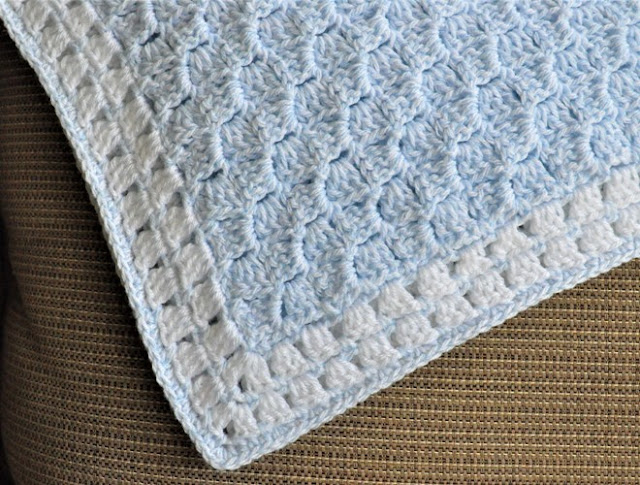 Isn't it happy-making to finish a project?  This week I finished the ripple blanket I'd recently started: 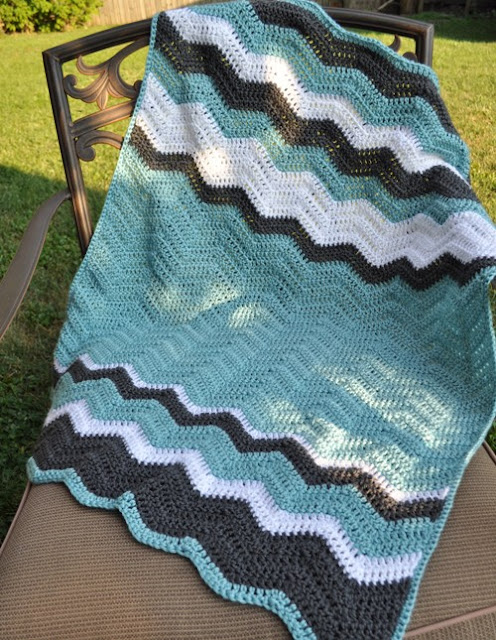 I used the American Waves Throw pattern, but made mine baby blanket size.  I couldn't tell you how many chains I started with.  With a project like this, I chain more than I know I'll need, then figure out how large I want the thing to be as I make the first row (removing the unused chains once I'm confident about the size).  To finish this off, I used the slip stitch foundation down the sides before adding a single crochet border.   I think that's all this blanket needed.  The solid section in the middle is larger than it appears in the picture, and with the different ripple stripes at both ends, I think I achieved a pleasingly asymmetrical look.  At least I think it works.

I used Red Heart Soft in the colors Seafoam, Charcoal and White.  I've got bunches, still, of the Seafoam color so you may see it from time to time in other projects.  Its softness makes it a nice yarn for a newborn blanket.  Who wouldn't want a blanket as soft as a cloud to wrap a sweet little newborn in?

And being on a bit of a kick to make some quick and easy projects and use up some stash, I started a Corner to Corner baby blanket: 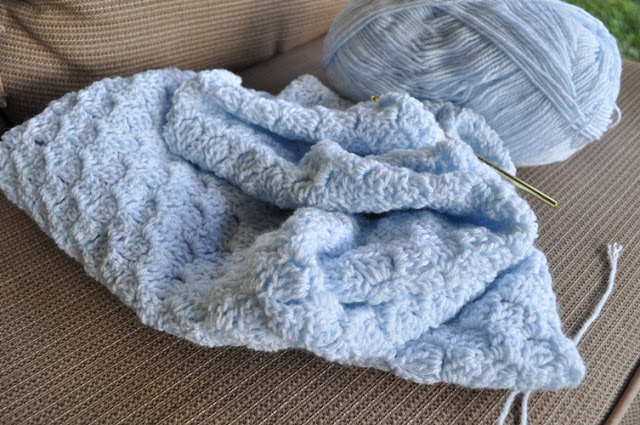 The picture isn't much to look at, but the blanket is over half finished.  See that big skein in the background?  That was nearly a pound of yarn when I began this blanket.  It was ginormous and goofy looking when I toted it to a friend's house this week with a newly started blanket.  Now that I've tamed the skein and it looks almost normal-sized, I'm hoping I have enough to work some of the color into the border.  I may be playing yarn chicken with this one.

A week of randomness...

The week started out with the discovery of a water leak and a couple of days of having a plumber here -- first to diagnose the problem, then to do what we all hoped was an easy fix.  A week later we're realizing the leak is still there.  What makes the leak hard to diagnose is that it's likely in a pipe that is buried in a cement floor in the basement - an expensive and messy proposition to fix because cement will need to be busted through to make the repair.

I'll spare you the details, but with our family room somewhat in disarray (because an entire closet of games and other various stored items had to be emptied out), and a house project bigger than me staring me in the face every day, I've found life this week to be...  well...  a bit distracting.

First, I finished the All Shawl by Doris Chan: 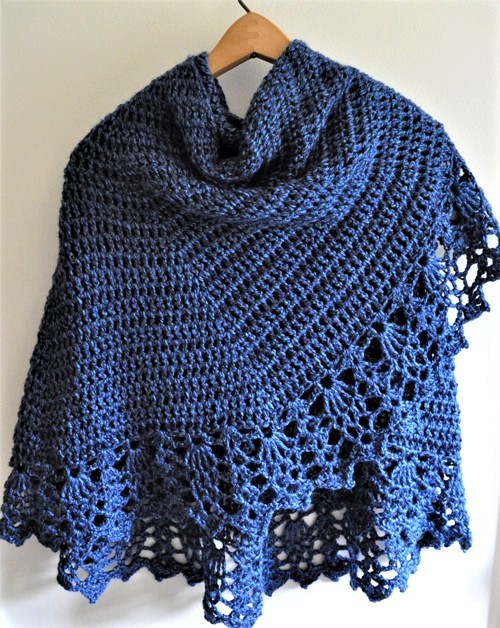 The yarn is Lion Brand Heartland in the colorway Olympic.  I'd bought bunches of this yarn once upon a time thinking the color was gorgeous, but for some reason once I had it home I couldn't imagine what I'd actually make with it.

Being committed right now to working from stash as much as possible, I went stash diving.  I think this was a great project for this yarn.  It makes a drapey fabric, and isn't this lacy border pretty? 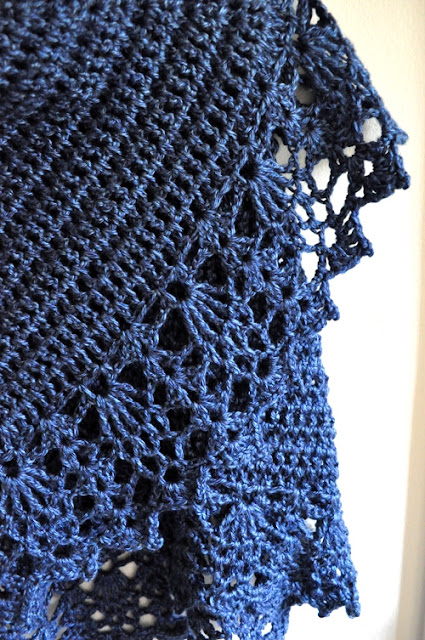 With that finished, I decided to give Planned Color Pooling a try for a  Learn Something New CAL on Ravelry...  I'd never (intentionally) done this before, so now seemed as a good a time as any to try.

Following Glamour 4 You's technique, at first I thought this technique maybe wasn't as hard as I had imagined.  I got to work and the first two repeats of the color pooling pattern looked pretty consistent: 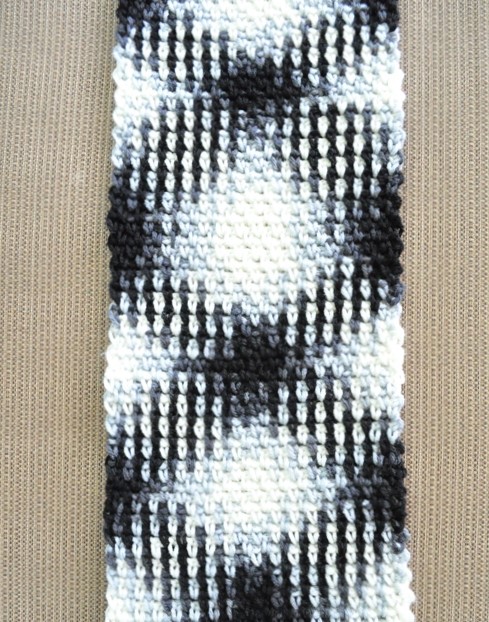 But then, the argyle pattern started getting smaller: 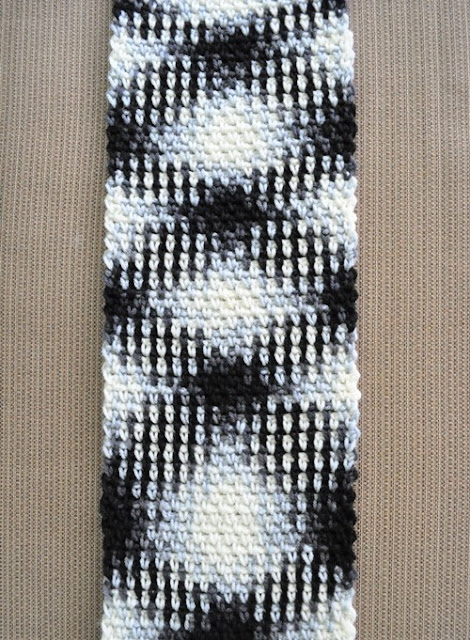 And then this weird teeny argyle repeat happened (twice): 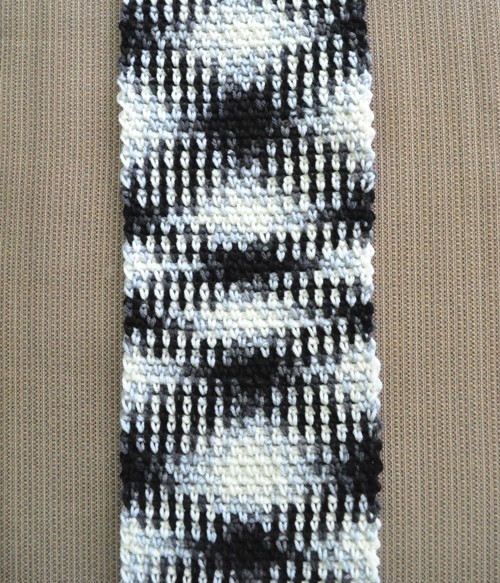 And then the pattern opened up again - to start the whole thing all over, presumably: 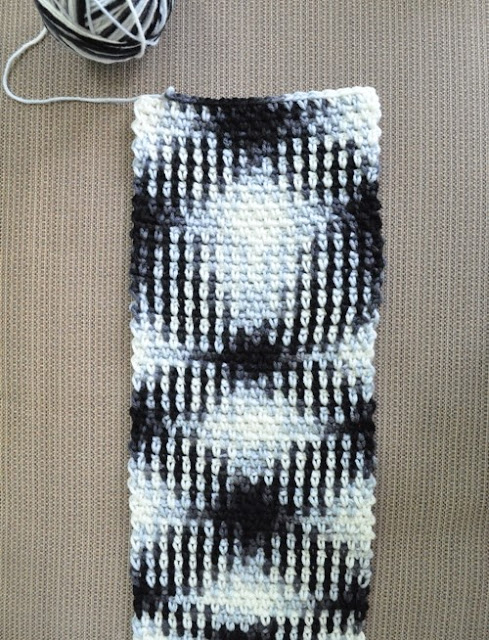 Not wanting to be defeated, and honestly feeling somewhat hooked on the technique, I searched for other helps and found a variety of resources.  Some people say consistent tension is important, some say counting the stitches per color is more important than tension.

I tried again, using Marly Bird's technique of neither counting the stitches, nor worrying about tension, but rather watching how the pattern moves.  This technique seemed more my style, but I found it too difficult to actually see the pattern moving as I was working it.  It's one thing to see the pattern clearly "moving" when you lay it down and step back from the fabric, or looking at a photograph.  But distinguishing just how the stitches are moving as you work each row isn't so simple when it's right in front of one's face.  Maybe this is easy for some people, but I found it extremely difficult.

After trying this technique a couple of different ways, I decided I needed to give the whole thing a rest.  I was mentally exhausted, and I don't care what anyone says - this is not easy.   Addictive, yes. Easy?  No.  Even Marly Bird admits that while it's addicting, people who've had success with planned color pooling will have frustrations at some point - because variegated yarns are all different.  And even the same colorway made in different dyelots may behave differently from one another.  I just don't know how much I want to do this if frustration is a given.

Exhausted and feeling the need to soothe my weary brain, I decided to start a ripple blanket I've been meaning to do for over a month now: 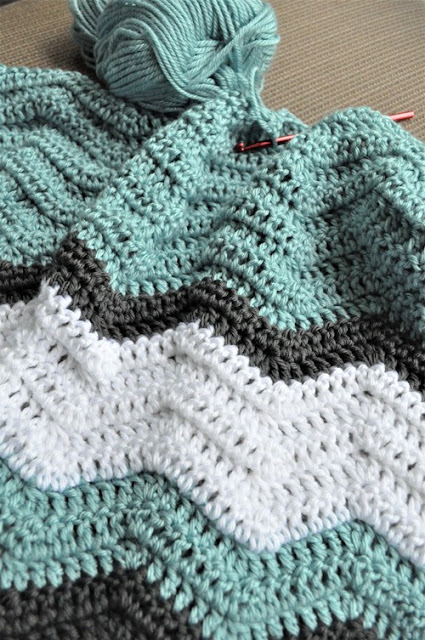 This is baby blanket sized and I'm enjoying the colors.  The ripple stripes are going to be random sizes for (what I hope is) a modern look.  This is another project made totally from stash and since I have more of the Seafoam (blue/green) color, the blanket will feature larger sections of that; the white and charcoal gray figuring in in such a way that I can make good use of what I have and hopefully finish those colors up as the blanket finishes.   It's an easy project that I imagine will be finished shortly.

And now I start a new week where once again, the first thing on the docket Monday morning is calling the plumber.  It's a good thing I like this plumber.  I'd just rather not have to see him so often (I don't think I mentioned we discovered this plumber when we had to have a new water heater installed earlier in the summer).   We've had our fill of water woes this year.


To see what other Yoppers are up to, visit our group on Ravelry!