Why God Won't Go Away by Alister McGrath 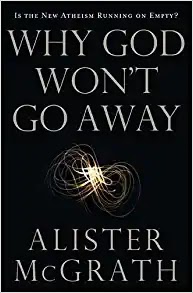 Subtitled:  Is the New Atheism Running on Empty?

﻿I found Alister McGrath to be refreshing and engaging as he took on the “New Atheist” in this book, Why God Won’t Go Away.

Of course there is nothing “new under the sun”, but McGrath explains who the current high-stakes players are in this newest installment of the atheist movement and what their tactics entail (namely ridicule and dismissal, but with militant zeal) which, of course, only serves to shut down conversation, not keep it going.

In contrast, McGrath entertains many questions asked by “new atheists” and gives reasonable responses. In reading this book (and I also recommend watching a debate or two between Alister McGrath and Richard Dawkins and/or Christopher Hitchins – such debates can be found online), one cannot help but see the difference between McGrath’s sensible (even humble) handling of a challenging subject and the defensive and insulting manner in which the “new atheist” tends to handle it.

A truly reasonable person should be able to rise above defensive and insulting posturing, not succumb to it as a main tactic in winning an argument. Insult and dismissal are not the tactics of those who honestly desire to have reasonable and rational discussion. Regardless of what side of the divide you may be on, I suggest giving Alister McGrath a read. The contrast in style between McGrath and the “new atheist” is stark indeed.

I received this book free from the publisher through the BookSneeze®.com
Posted by Becki No comments: