Popping in on Christmas evening to report a very happy holiday weekend celebrating Christmas. Two wonderful services at church this weekend, and then family celebrations -  Christmas Eve with just our boys, and Christmas Day with some of our extended family.

I was able to finish all of the linen-stitch scarves I planned to make as Christmas gifts, and all I can say is I'm really glad I got some still shots of just the scarves (before I wrapped them): 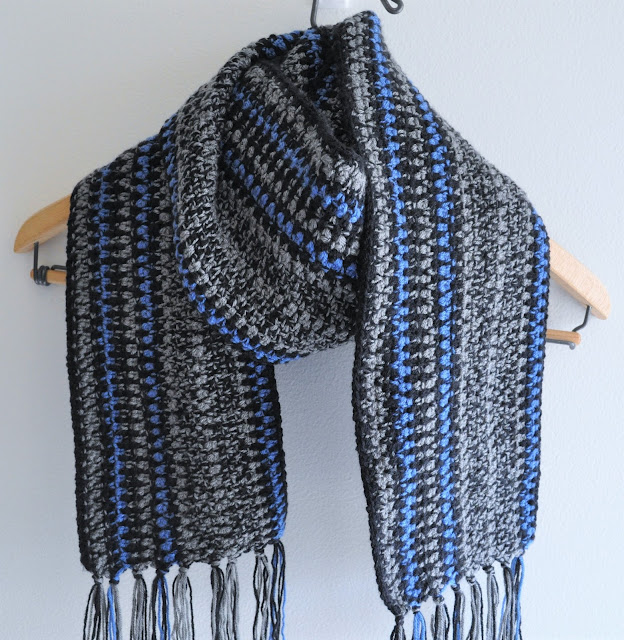 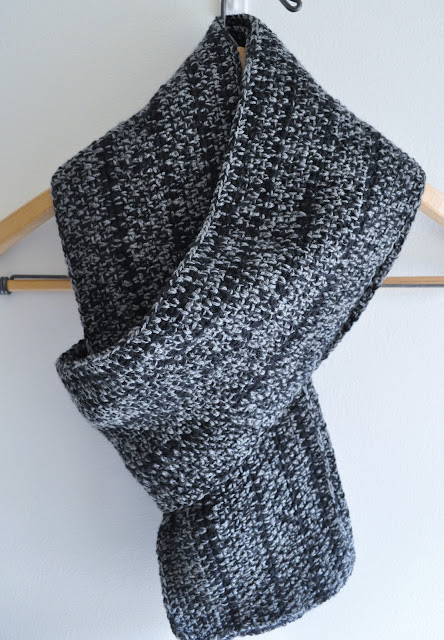 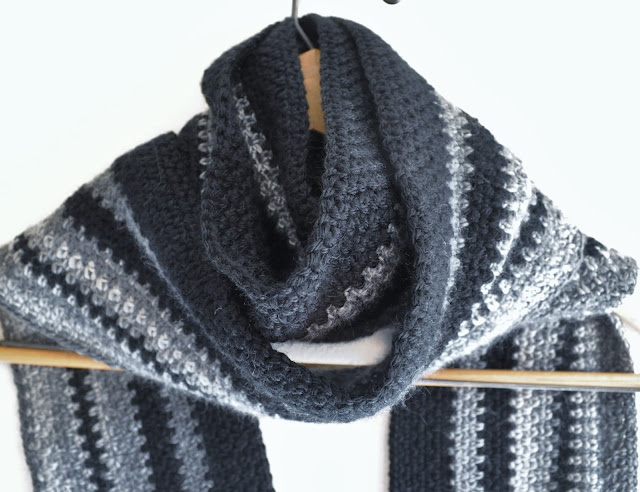 Because... this is what I got when I tried to take a picture of the scarves being modeled: 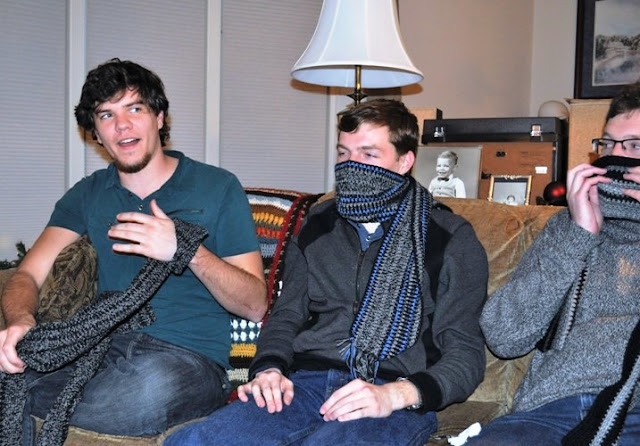 "Seriously, guys...  Can I not get a good picture of you modeling your new scarves?" 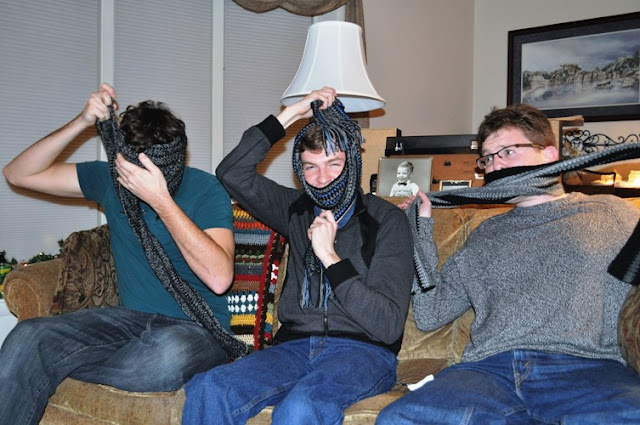 Though they did humor me (I guess) for just a minute when I asked for a serious pose: 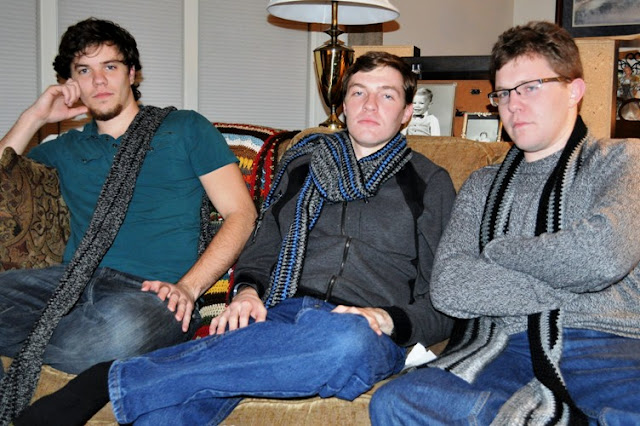 
I'm happy to report that the scarves were a hit.  While these three can be real goobs at times, they are also pretty terrific sons.  :)


Wishes for happiness to you and yours during this Christmas season.

And peace to all.

I've been down sick most of this week with a bad cold - which meant plenty of crocheting time (in between drug-induced naps).

I think it was Wednesday when we saw our first snow of the winter season.  (Or it could have been Tuesday, really...  I can't remember...  the past week is all melded together in the fog of my murky memory).    But whatever day it was, even with a foggy, sick head I was able to appreciate how pretty was this first snow, and I decided to poke my nose outside and snap some pictures:

Poking my nose out the back door: 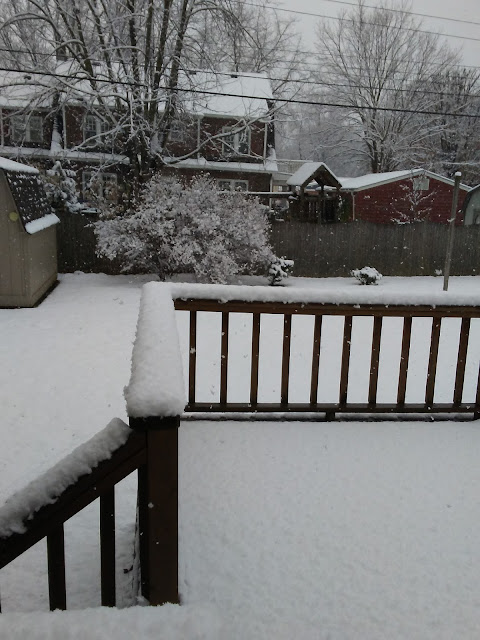 And then out the front: 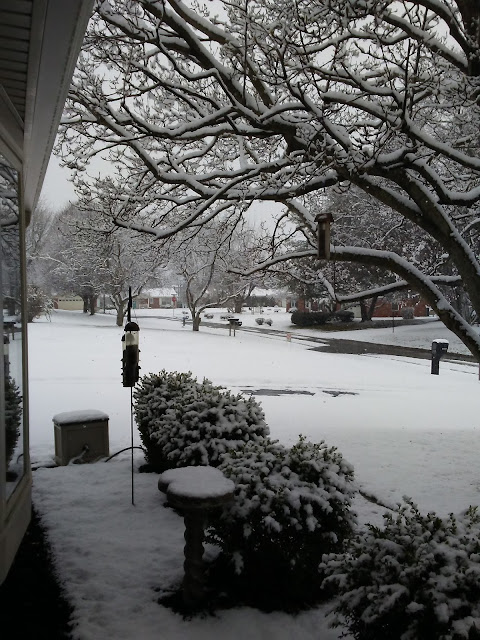 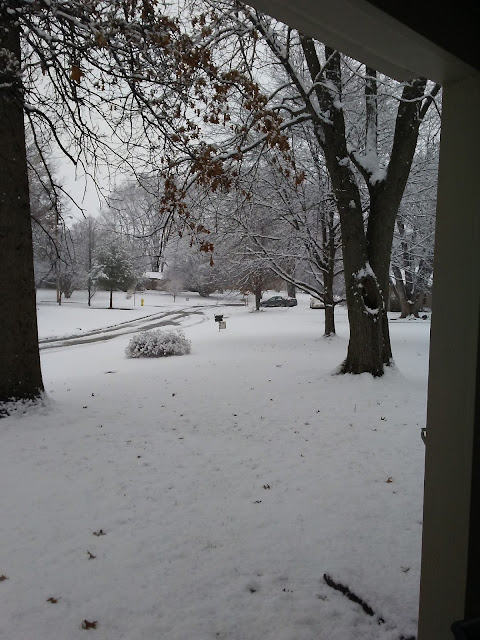 and to the right


And then pulling my nose back into the warm house and closing the door, as I turned around it occurred to me to snap a picture of what it looks like when someone is coming into my house: 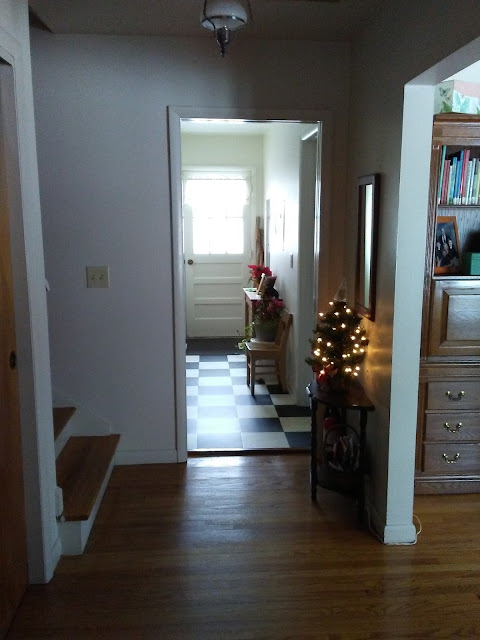 At the time it seemed like a funny thing to do, but seeing the picture, now I think it's kind of neat. And I'm curious if any of you might like to do the same.  Wouldn't it be fun to step inside each other's front (or back) doors and just take a peek inside?  :)

Speaking of peeks, here are two little snapshots of  the Linen-Stitch Scarves I nearly finished this week (they're finished except for weaving in some yarn ends): 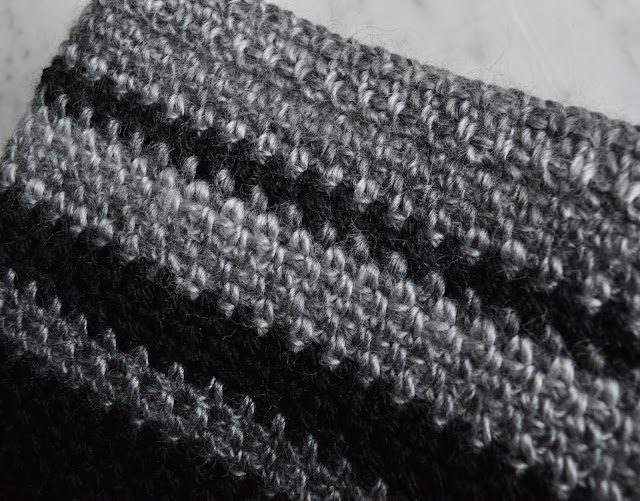 A gray and black striped scarf 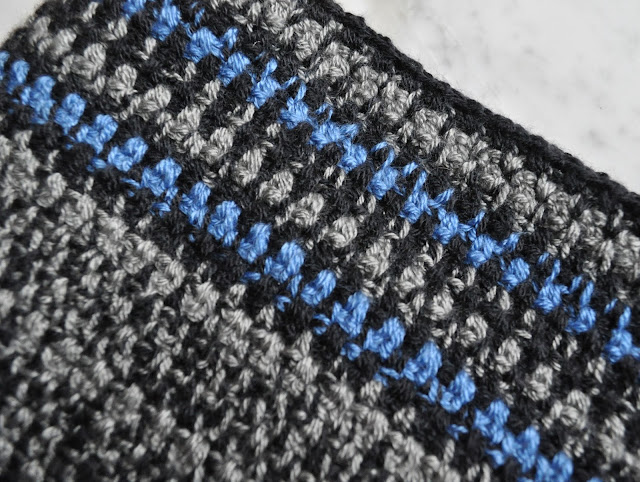 and a blue, gray and black striped scarf

One more to go!  Hopefully, next week (say, that's Christmas Day!) I'll have some modeled shots of these scarves.  That is if I have them all finished.  Note to self:  Take pictures before wrapping them - just in case I forget to round up the models, or in case the recipients decide to be bashful.

To see what other Yoppers are up this week, visit our group on Ravelry!


Getting started a bit late, I'm happy to say I finished the first of the three scarves I decided to make for Christmas gifts. 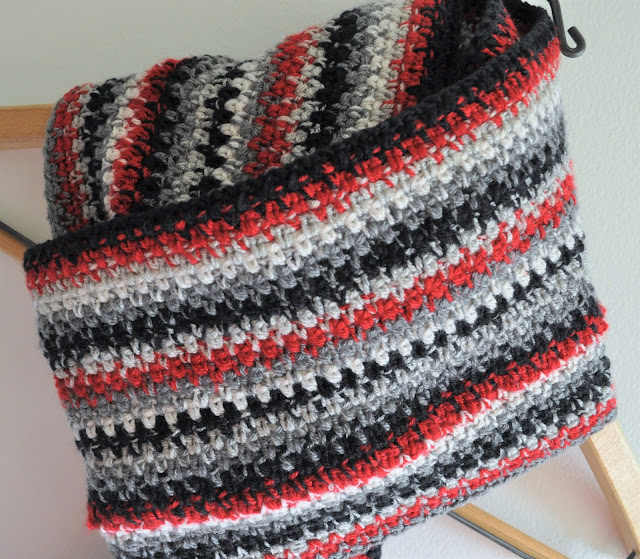 Unfortunately, though... I have a problem.  See...  when I asked my husband if he thought it would make a good gift for a guy he said, "Oooh, yeah!  That would look really good with my dark gray coat."

Uuuuuhhhh...   Hmmmm...  Well...   Shoot.  As nice as it was to hear that he liked the scarf enough that he'd like to wear it, I really wasn't making it for him (he already has a scarf I made, so don't feel badly for him).

But he did really seem to like this one, and he especially liked the red in it.  So how I could I say no?  I did some quick calculating in my head and decided that I could probably make 4 scarves before Christmas.  So I told him he could have it if he wanted it. 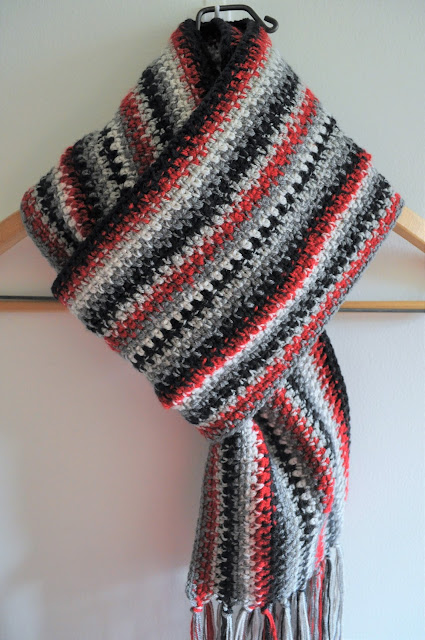 Then he told me "But you don't have to put all that "trim" on it for me".  I saw a window of opportunity (i.e. a chance to possibly talk him out of this scarf in particular) and I told him that was fringe and it's one of the wonderful things about using this yarn. It makes a great self-fringe and I don't have to weave all those ends in.   I told him the fringe stays. And then I told him that fringe is trendy right now (thinking the word "trendy" might just turn him ever so slightly away from wanting to wear this scarf). 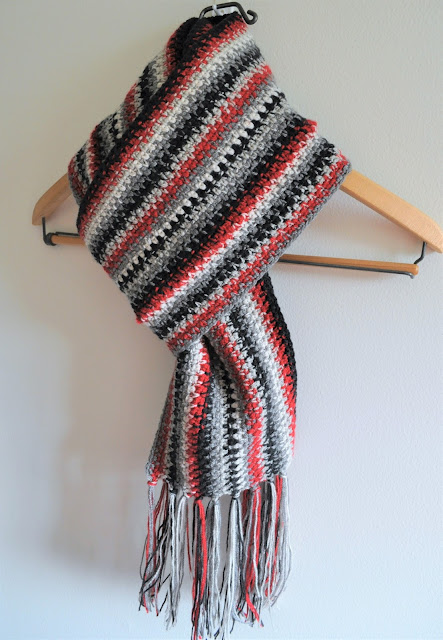 I replied with a straight face and only the slightest hint of sarcasm, "Yes...  You'll be one trendy, hip guy wearing this scarf." 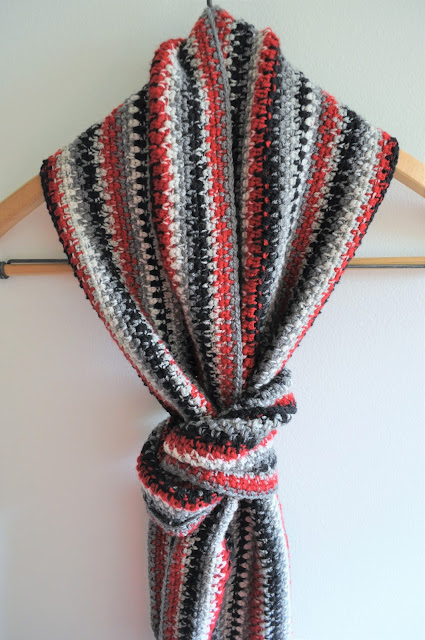 Now, I'm pretty sure this last bit wasn't meant to sound patronizing, but somehow it did.  I told him I didn't want him wearing a scarf I've made for my benefit. I know reading these words, much of the nuance of this conversation is lost, but it was one of those awkward moments where you feel like someone is trying to make you feel good about something you've done and all you can think of is that now your work is added to.

And yet, what person doesn't feel the pleasure when someone wants to wear the thing they've just made. 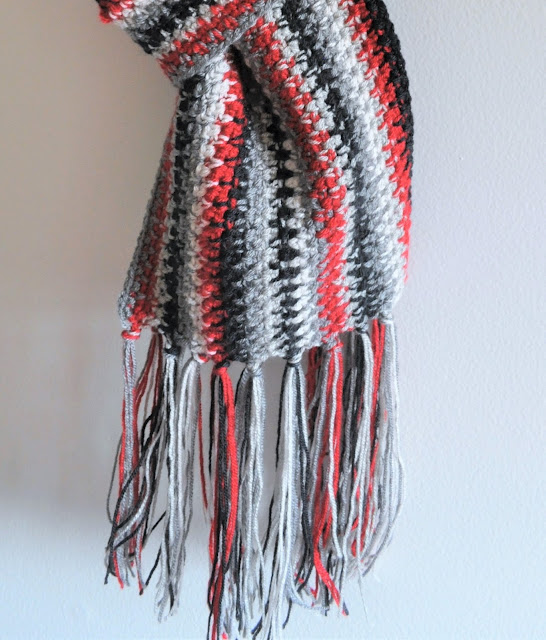 So, I don't know...   Of course I'd love for him to have the scarf if he'd really enjoy wearing it.  But I don't need any favors here.  Then there's the bigger problem.  The person I was making this for loves red.  And yes, I told the mister that (though, I think he was maybe only half listening).  At least I think the other fella still loves red.  But I don't think he'll be all that excited to get a scarf with red in it and see another scarf I've made using red.  He and the mister are sometimes together and well, if they're both wearing matchy-matchy scarves that could be embarrassing.

Maybe I'll find out his current favorite color is blue.  Or green.  Or just gray!  Gee...  wouldn't that make things easy!  Okay...  I've got an update before this was published:  I did ask, and while he mentioned red first, he also said he liked olive green and blue.  :)   Hmmm...   I see possibilities here...

So off I go now to feverishly knit (correction - crochet) three more scarves (the second one is about half finished so I do feel good about that).  I think fellow Yopper, Sanda, (AKA Sam) and I are having our own personal CAL for the next couple of weeks with these linen-stitch scarves.   Anyone else can feel free to join us if they like.  :)

I may or may not show my finished scarves between now and Christmas, but we'll see.  My scarf saga may have a new twist by next week.

Until then, I'll probably just be knitting dishcloths when I need a break from crocheting scarves. 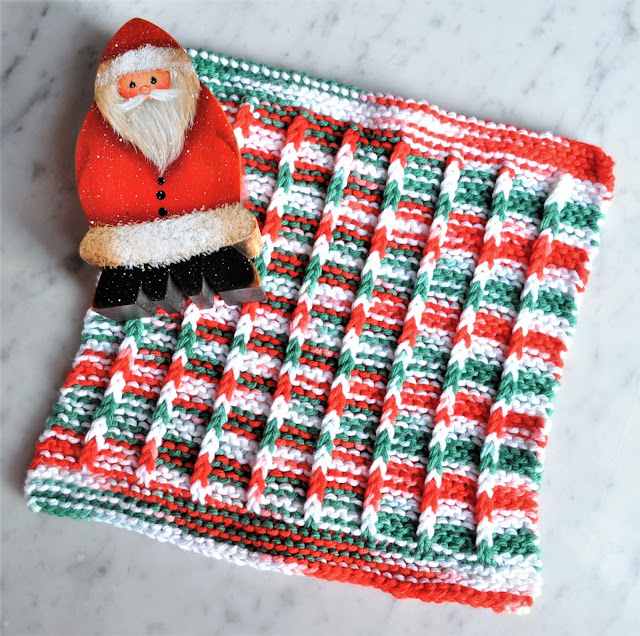 I'm loving this variegated yarn (Lily's Sugar n' Cream in the color Mistletoe, and this stitch pattern.  Though, to get the look above, I put a 4-knit-stitch border on each side and a half-inch or so border on the top and bottom.

I hope you're enjoying this blessed Christmas season.  To see what other YOPPERS are up to, visit our group on Ravelry!

It's been a week of starts.   Early in the week I decided to try making a Lagniappe Shawl and this is just a peeky peek at the beginnings of that: 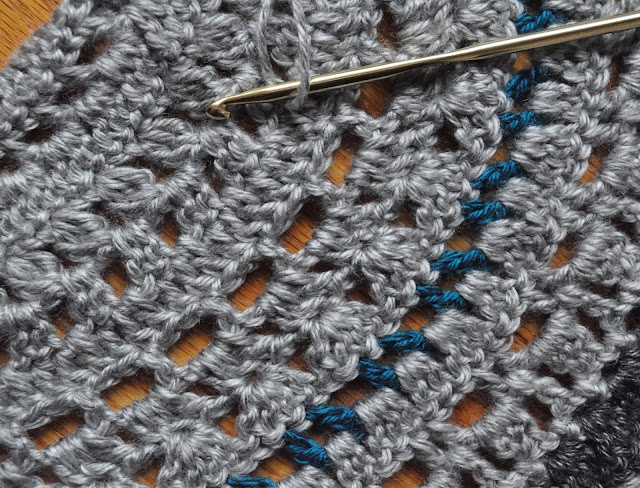 And then I was inspired, for some reason, to knit a Slip Stitch Striped dishcloth: 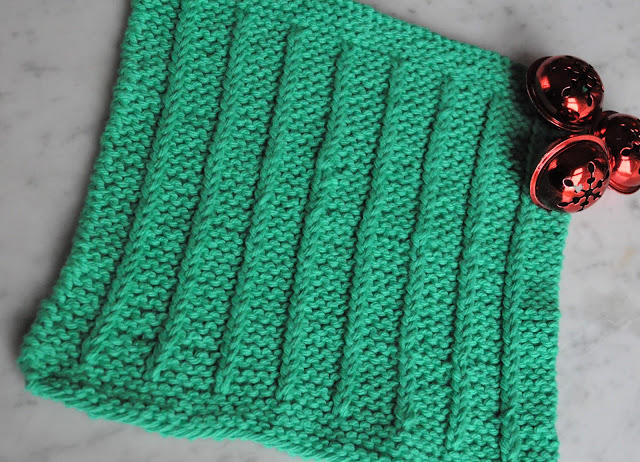 Still working on my tension...   :^/   I decided to make another one in red and be all set for Christmas. And hopefully improve my tension issues.

And then late in the week I remembered that I was to host a CAL today in the Our Happy CAL Place on Ravelry.  Fortunately, this week's theme is Quick & Easy.  I thought about several different projects, but when this Christmas Holly Embellishment crossed my computer screen, I decided it fit the bill: 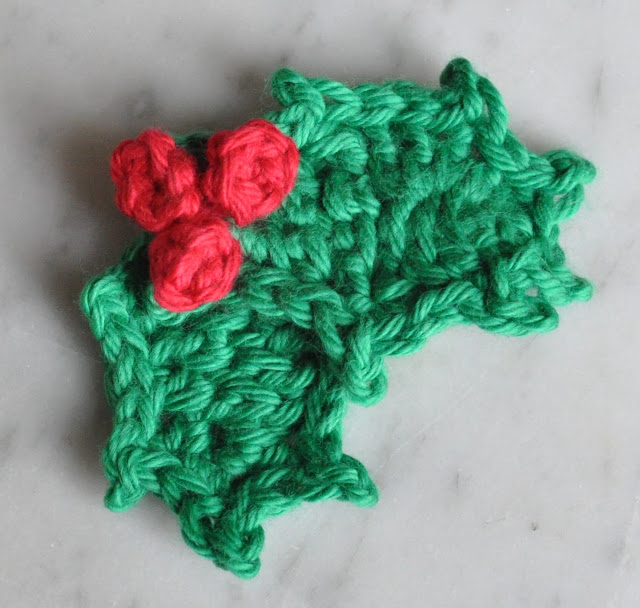 I'm  little embarrassed showing such  a large close-up of this project as the leaves are all wrong. See... when I pieced this together, I didn't realize I had the leaves upside down 'till I finished and compared mine to the original.  In the original, the "vein" running down the center of the leaves is prominent, but it's totally lost in my leaves above.  Ah well...  it was super quick and super easy.  And if you don't look too close, it's kind cute and perfectly acceptable for tying onto a gift package on Christmas day.

And then yesterday I got the great idea to crochet some more  Linen Stitch Scarves for Christmas gifts. I'm hoping to make three (in different colors), with the first one I started being black and gray with an accent of red: 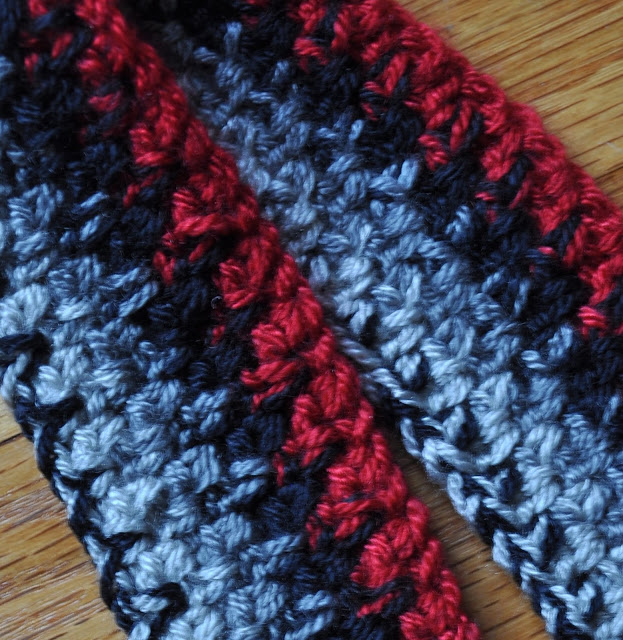 So that's this past week in crochet!  To see what other Yoppers are up to visit our group on Ravelry.