Things I learned on my 30-Day Minimalism Challenge... 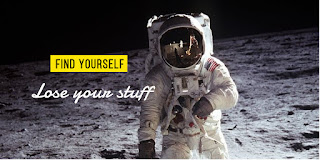 As I spent some time in November purposefully going through storage areas with a mind for getting rid of stuff, getting lighter...  I've learned some things.  Some things may be just about me and some things I think may be truisms that anyone can benefit from hearing again (I say again because I'm not the first to say them, and I won't be the last).

Please know that when I use the pronoun "you" I'm including myself.  If the "you" statements sound judgy or bossy, just reject that thought.  While I may think they're probably, generally, universally true, I don't know who you are, the life you're living, the root of what guides you.  I'm not thinking of any of you in what I write.  I only include you (whoever you are) as likely recognizing some of the things below as general, universal truisms.

So... with all that said, here  are some of the things I learned (or  relearned) last month:


1.  Storing stuff begins the process of collecting stuff if one isn't careful.  Now, curated collections can be cool - if you're into that sort of thing, but you all know that's not what I'm getting ready to talk about here.

I don't tend to think of myself as a collector, per se, but it is undeniable that I have squirreled away far more things than I knew I had, and much that I didn't even want when I took an honest look at it.  In time, this "squirreling away" results in collections of things that can be really hard to get rid of.  I suspect because collections have a way of seeming more valuable than the individual parts.

This "collecting" can happen in any category, and in any room or space that stuff inhabits.  It's easy to not see all the stuff - or when one does actually see a thing that's not being used, it's almost instinctive to think that that thing will be useful some day.  Afterall, why did I keep it in the first place, if I didn't think it might be useful or have a purpose?

And it is at this point where some variation of a scarcity mindset can take hold - you may say to yourself...  I'd better not get rid of this because when I want it, I might not be able to get it.  Or I know as soon as I get rid of it, I'm going to discover I need or want it.  You maybe even pause for a minute or so flip-flopping between finding a safe place to put it so you'll be able to find it when you need it, or making a conscious decision to leave it out in the open so you don't lose it.  Or am I the only one who does this?  😏

Somehow, in this emotional juggling, I forget that if I truly do realize later that I need it or want it, I can most likely replace it very easily.  Overcoming the different variants of a scarcity mindset was the first (and is probably a continual) hurdle for me in the letting go of stuff.  Even stuff I don't particularly like. 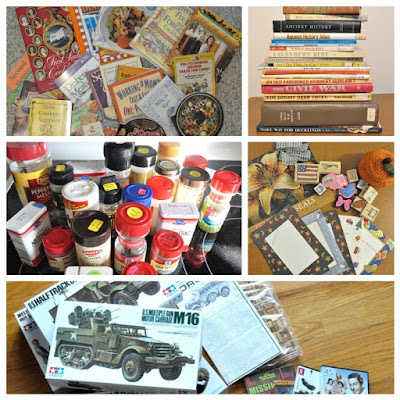 2.  Fortunately, getting rid of begets more getting rid of.   As the process of getting rid of stuff continues, one begins to see one's stuff through a different lens.  Over the course of the last 30 days I found myself actually curbing my desire to get rid of stuff just for the sake of getting rid of it.  The experience of clearing space and letting stuff go was not just a little bit euphoric.  And frankly... that worried me some, so I told myself to be measured about it.   But I found it interesting that releasing things was so freeing I just wanted to get more free.  While we all know collecting things can become addictive.  I was thrilled to find out that experiencing freedom by releasing stuff is pretty addictive, too.


3.  Getting rid of something isn't giving up on it, or me, or the idea that I might pursue it in the future.  It just doesn't!  Believing that was a challenge - until I let go some things I'd been holding onto for this very reason. 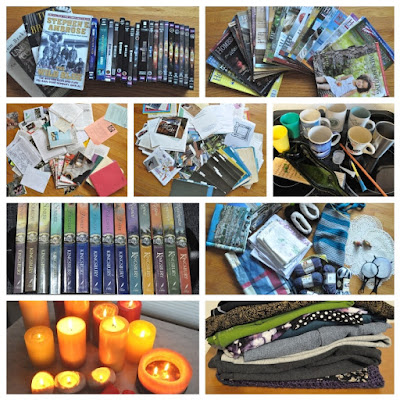 4.  If you can't bring yourself to believe #3, be gentle with yourself.  Believing is seeing, in this case; but it's okay if you're not ready to believe.  Try believing in something small to start.  Big changes can start small.   And if you have to remind yourself of #3 as you go through different areas, well... I suspect that's probably normal.

5.  Organizing isn't the solution to too much stuff.  No matter how organized hoarded stuff is, it's still a hoard of stuff. Using stuff or getting rid of it is the solution.  If storage helps one use what one has, then great.  But if organizing just makes all the stuff look better, the underlying problem of having too much stuff doesn't resolve.  In fact, if one isn't mindful and purposeful about all of this, storage and organization will likely just enable the collecting of more stuff.  And round and round we go...

6.  Find different and responsible ways to get rid of excess stuff.  Donating and selling your unwanted items will likely make you feel better about all that you've spent money on that you're now recognizing you don't even want anymore.  Of course, recycling or throwing away what isn't going to bless someone else is certainly an option, but inasmuch as it is in your power to do so, try to not let your "getting rid of" become someone else's burden. 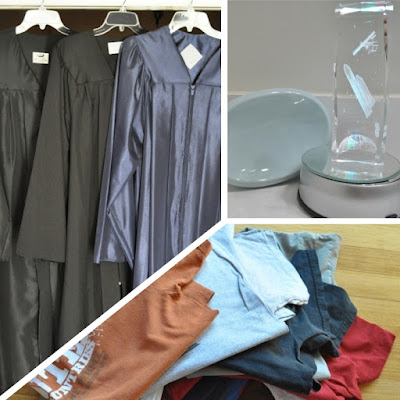 7.  Making your excess stuff someone else's burden can take many forms.   For example:


9. Keep receipts - for however long the fine print on your receipt says you have to return items.  And don't hesitate to return things if you have buyer's remorse or find you don't need the item(s) you purchased.   If you've lost your receipt, many stores will give you the the most recent lowest price on an item if they still have it in stock.  Returning merchandise isn't a great long-term solution to buying too much stuff.  But recognizing that unused items can be returned, and returning them will help create the mindset that you don't have to be a storage facility for everything that catches your eye. 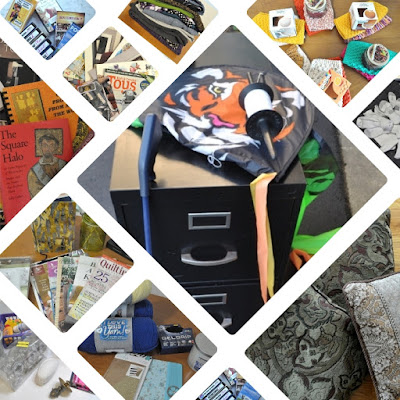 10. You  don't have to always have a surplus of everything you're going to need and use.  That doesn't mean it's not a good idea to have an extra package (even a big package) of toilet paper tucked away, or the next tube of toothpaste you're going to need in a drawer at the ready.  Or any number of other consumables that get regularly used.  But be careful that you don't find yourself being a stockist of the numerous sundry items that you may use someday.

11. Which brings me to this point.   I don't know if this is a universal truism, or if it's simply true for some, but I have come to recognize that the more stuff I have, the less productive I am.  Energy (mental and physical) is drawn upon to keep track of and deal with my stuff rather than being freed to be creative, loving, caring, taking care of myself, giving to help meet the needs of others, etc...

12.  Doing this exercise for an audience really helped me.  It wasn't an accountability thing so much as I knew the challenge of posting a daily picture and writing a little something would serve to motivate me. And the encouragement I received was really helpful.  It helped it feel like a game.  I wanted to think of fun ways to present my "junk".  I don't think I want to subject blog visitors to month-long minimalism challenges very often, but finding a way to share the continuing decluttering adventure might help me in the future.  We'll see...

13.  Look for and watch, listen, or read about others' experiences in minimizing.   Avoid (for a time, anyway) books, videos, even people who are a wealth of ideas for finding creative ways to use stuff.  Or organizing stuff.  These resources are terrific when the time is right.  But if you're wanting to get serious about not having so much stuff, get insight from those who've truly embraced the idea of minimalism.  They've got some very good things to say. 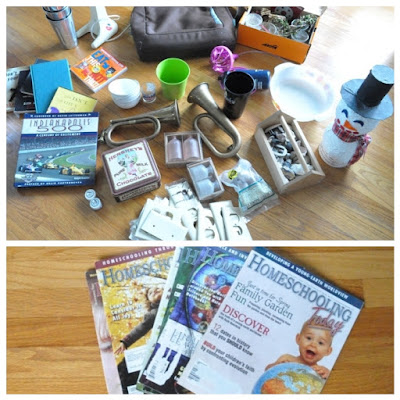 I'm not a minimalist, and likely never will be.  But boy, do I want to become freer from stuff than I am.  I'm pretty sure this is a life-long pursuit.   And while I don't have as much life ahead of me as I have behind me, it still seems like a worthy pursuit.  I'm finding in these senior years that I still care (maybe care more) about what my purpose in life is.  I want to "get it right" more than I ever have before.  I want to leave this earth with my loved ones full of good thoughts about me, not burdened down by how they're going to deal with my stuff.

Lastly, but very importantly to me....  getting freer from stuff goes hand in hand with my faith and Biblical teachings that instruct me how I am to live.  It is consistent with thoughts I have about how I want to treat this earth and other people who inhabit it.  So much more to write about this, but I'll continue to try to live a life of owning less stuff before I opine too much.

Several people have either commented here, or mentioned to me privately that they've found this series of posts motivating.  I can't tell you how happy it makes me that my little effort at "getting rid of" has been that for anyone.  But it shouldn't really surprise me.  It was reading articles and watching videos of others that inspired me.  That's what we need to be for each other - inspiration and encouragement.  Thank you to everyone who was that for me over the 30 days of this little experiment.

Now, hopefully I can carry this minimalism challenge into this next month and the new year.  It will take a whole lot longer than 30 days to truly effect a real and lasting change in this area of my life.

If you're thinking about doing something like it, I can only encourage you to do so.  Give it a shot.  You've got nothing to lose.  Except stuff! 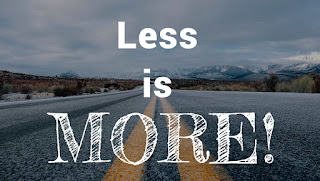