Last night I started crocheting this Chunky Color Block Cowl.   It wasn't exactly part of my plans, but I was tempted into buying 6 skeins of Lion's Pride Woolspun last week when it was on sale and Michael's offered $5.00 off any $20.00 purchase of Lionbrand yarn.  Of course, since it was on sale for 4.99 I had to buy that sixth skein to bring my purchase up to (and over) $20.00 so I don't know how much I really came out ahead in the end.  But it seemed a good enough price to give this new-to-me yarn a go.

I picked out colors from the new Prints and Mixes collection.  My colors are Cranberry, Sparks Mix, and Oxford Grey.  I know...really?  I needed another gray???

It's the first time I've used such a large crochet hook.  It's a P.  And I only have one hook larger than this one - a Q.  It's not hard to crochet with, but it is a bit awkward and takes some different handling than my smaller hooks. 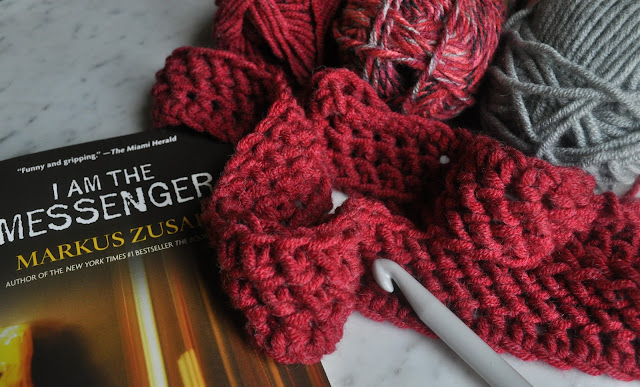 And last night I finished I Am The Messenger by Markus Zusak.  From the very beginning I've had mixed feelings about the book.  As I said last week teenage angst is something I don't care for, and this YA book is full of the male version of it.  But the ultimate message of the book is a profound one (I can't tell you what it is or I'd be giving away too much).  I do think, though, that it could have packed a bigger punch. And I think it could have had a more believable ending.  I don't mean the very end, but the explanation in the last chapter of what has gone on throughout the book had at least one totally unbelievable aspect to it - which, to me makes it feel rough and a bit rushed.

But even with what I thought were shortcomings it was a thought provoking book and I can't say I regret spending the time on it.   If teenage angst (especially sexual angst) is something you tolerate well you might really like this book.   I really don't so my recommendation is ...I don't know... a cautious one.  If you're the least bit curious, I can at least recommend it enough to say "give it a try".

Check out Ginny's weekly Yarn Along to see what other yarnies are up to.  Just click the button below. 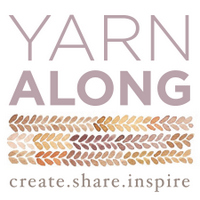