After finishing a large project and while waiting for two new CALs (Crochet-A-Longs) to begin in April, for the last couple of weeks I've tried to content myself with some simple, small crafts. 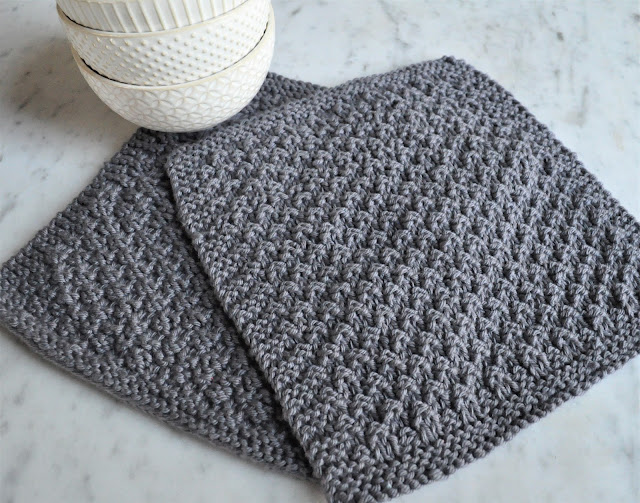 Finally I had knit so much that one of the joints on one of my fingers started to hurt.  I obviously had overdone it, so I gave knitting a break and looked for something else to satisfy my itch to create.   I had recently bought (what I thought was) a complete kit to embroider pillowcases, and I decided to get that out.  Well, imagine my surprise when I opened the package to find stamped pillowcases, but no embroidery floss.   I've since learned that this is pretty standard, so now I know...   and I'm just glad I only paid half price for the "kit" I picked out.   Fortunately, I had some embroidery floss in my crafts stash and I was able to approximate the colors that were suggested in the pattern.   So I got busy embroidering for the first time in years. 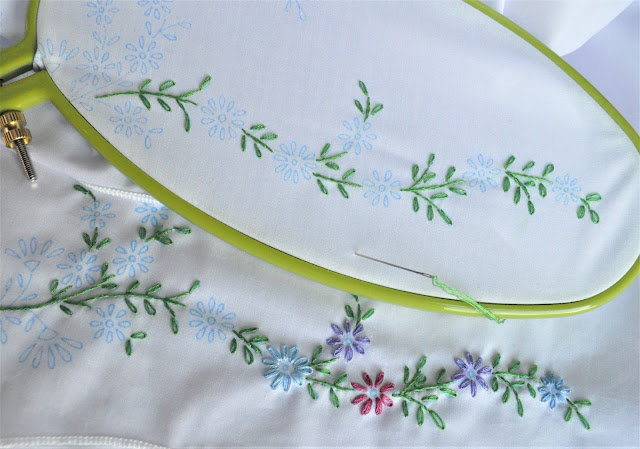 I know...  it's super simple - with only four stitches to complete the pattern (running stitch, loop stitch, french knot and satin stitch.  I'm transported back to my young girl days when I first learned to embroider - remembering these simple stitches that probably made up very simple designs. In fact, I probably once upon a time embroidered a simple design pretty much exactly like the one above. Simple seems about right, though. It's soothing and enjoyable.

Inspired by picking embroidery back up, when I was in Jo-Ann's last week with a handful of 50% off coupons I looked through their pillowcase "kits" and chose a more involved pattern to try next.  And then when I was in the embroidery floss aisle I happened to notice that they sold packages of plain pillowcases.  Two to a set.   At half the price of the "kits".  Wow!  Using my 50% off coupons and stamping a picture on the pillowcases myself I could create my own "kit" for significantly less than buying discounted pre-stamped pillowcases.  I felt so clever.  I know... if I was really clever I would just draw a design on a pillowcase to embroider, but I'm not that clever -- yet.   Anyway... for now I am enjoying this.  And getting back to embroidery has been on my YOP list for the last two years.  Yay me!

And then yesterday being April 1st, I was able to begin crocheting along with some folks on Our Happy CAL group on Ravelry.  We are each crocheting our own Round Jacob's Ladder Baby Blanket.

When I first started creating these weird large chain spaces, I didn't know what to think: 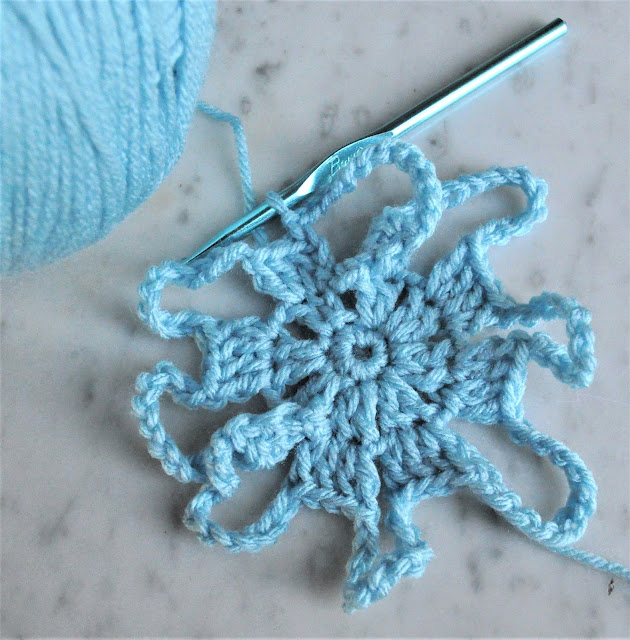 I mean, I knew that the blanket was crocheted with all these chain spaces and somehow later something was to be done with those spaces to create the "ladder" design, but I just couldn't quite imagine how this worked.   It felt like a lot of "going on faith" to just continue on, so I went back to the CAL group on Ravelry to see what anyone else had to say. 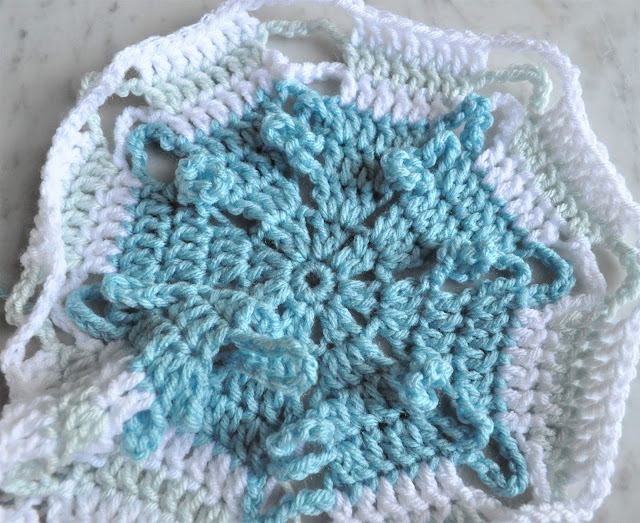 One of the other participants in the CAL said she was able to "braid up" the loops as she went and that gave me confidence to give it a try.  Following the instructions at the end of the pattern, I braided up the rows I had completed thus far: 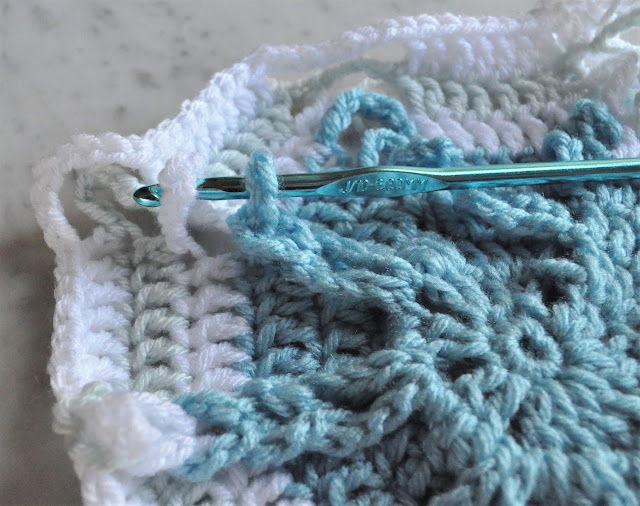 One, by one, each loop is pulled through the loop below it... 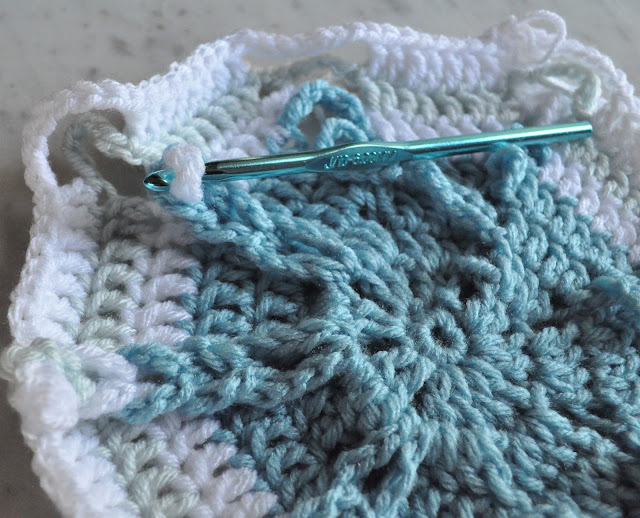 Until they're all braided up. 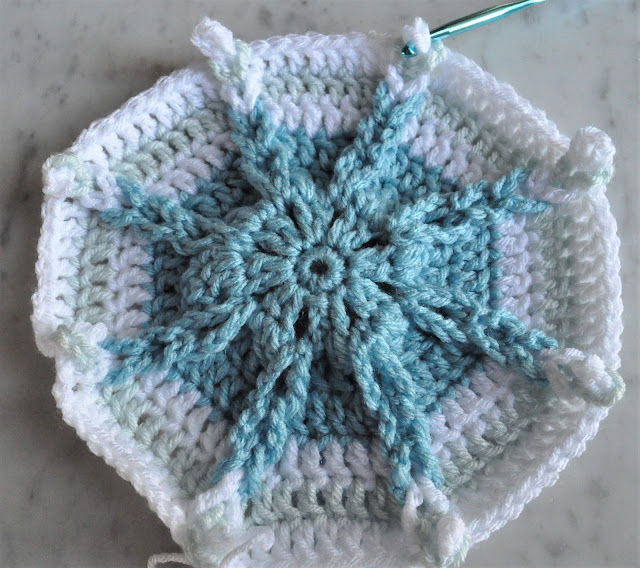 Is that cool or what?!?!  I love this.  And it's very easy to do.  Now I can crochet on, confident that in the end all the crazy big chain spaces will work together to make a pretty blanket with "ladders" radiating out like spokes on a wheel to create the intended design.   What fun it will be to watch this blanket grow.