This week I'm hosting a Crochet-A-Long on a Ravelry group:  2015 Kitchen & Bath Cal.   I've invited the group to join me in making some Sea Anemone Bath Puffs.    You will need a free Ravelry membership to access the links above, but I've also explained below how to make (my version of) these: 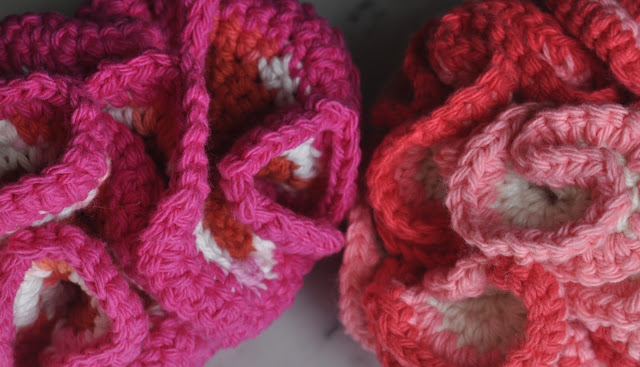 Nevermind that Sea Anemones don't look like this, but since the name they've been given has me thinking of places like the Great Barrier Reef (not that I've been there, but...), they do sort of make me think of coral.   So...let's just think of these as Brain Coral's yarn cousins and have fun crocheting some wonderful hyperbolic "balls" of squishy goodness.

I know...they kind of look complicated, don't they?    They're not.  They are super-de-duper simple.   Yes, I just said super-de-duper, and you will too - after you've made one.  And, if super-de-duper simple isn't enough to make you run and get your crochet hook and yarn, let me add... I'm pretty sure they're impossible to mess up.

Have I convinced you to make one, yet?

Why do you not have yarn and hook in your hands, already?!?

I'll start with some general instructions and pictures of the first two I made.  Then I'll spell out the specific instructions of my modified puff (modified in ruffliness, size, and how I made the hanging loop).

The short, simple, general instructions are in this link, or below using more words (because I always use more words.  And yes I know that's something to work on.  And I am.)  The short, general instructions will make a bath puff with no hanging loop.  You'll probably decide you want to make a puff with a loop and use the more detailed instructions further down - below the next two pictures - that explain how to start this puff with the hanging loop.  But I suggest reading everything here.  And not just because I wrote it. Read it because it will give you a clearer picture as you're starting out just how these ruffly puffs form - and will give you confidence that you really can't mess these up.

And this is what you get (or something like it): 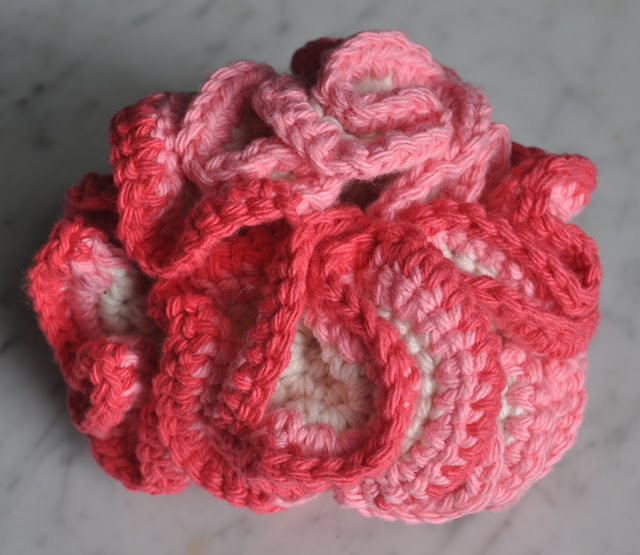 Here’s a picture of the second one I made with looser ruffles (and it’s also a tad smaller): 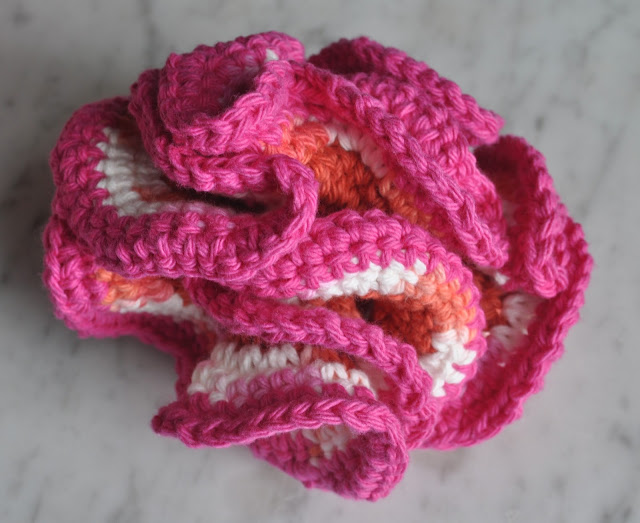 Okay, now for the detailed instructions for how to make a puff by starting with the hanging chain:

Start by chaining about 25 (you can chain more or less, depending on how long or short you want that hanging loop to be).

Then starting with the second chain make a row of slip stitches back down that chain. This makes nice “cord”: 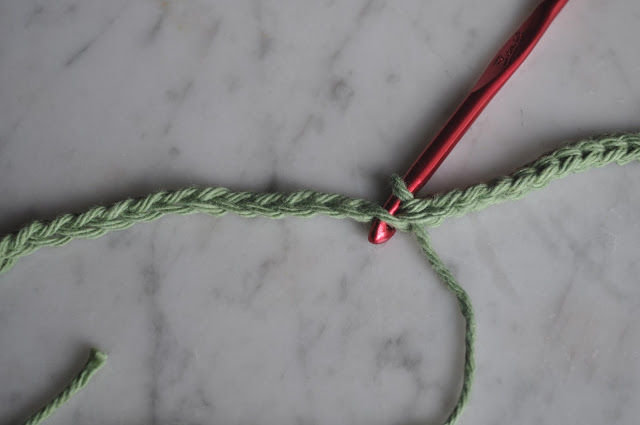 Slip stitch the two ends together to make a large loop: 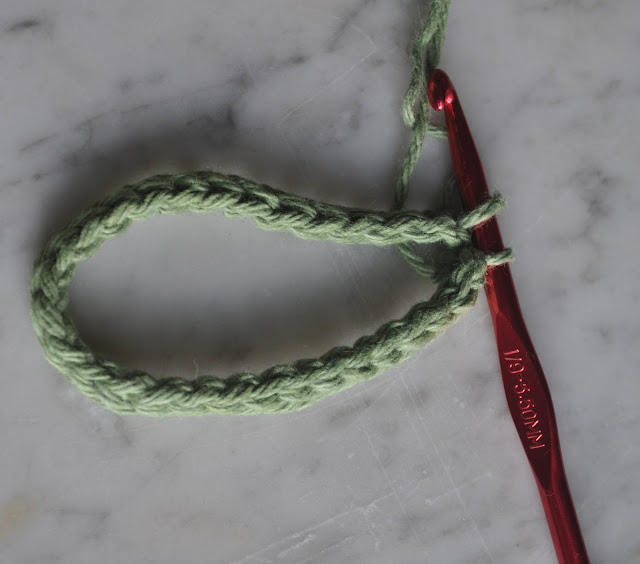 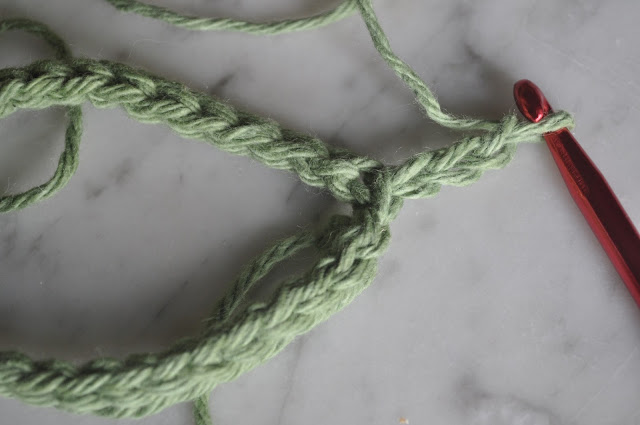 And join them with a slip stitch to the bottom of the hanging loop: 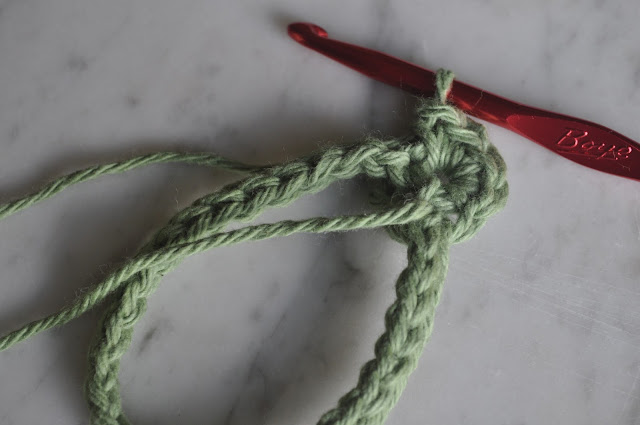 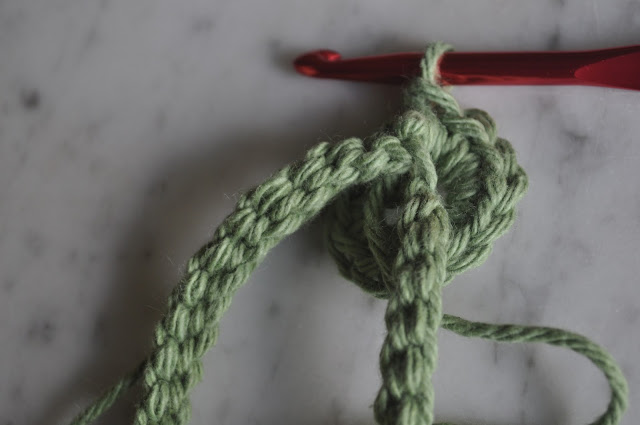 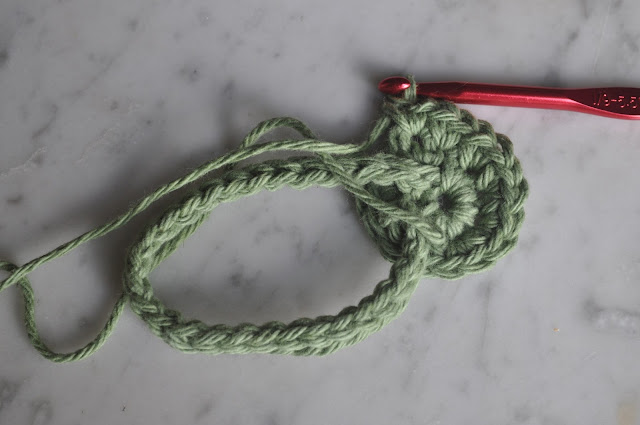 And then keep going around and around, crocheting 2 single crochets into every stitch. By round 4 or so, you’ll begin to notice the circle of yarn begin to ruffle: 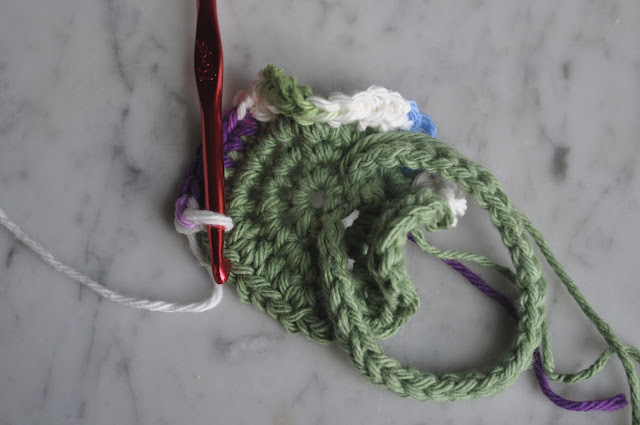 Again, after experimenting, I’ve concluded I actually prefer my finished puff to not be as dense as the original pattern creates. I like it a little looser - especially for a bath puff. To achieve looser ruffles, you simply switch back to making 1 single crochet stitch in the stitch below (instead of 2 single crochets). 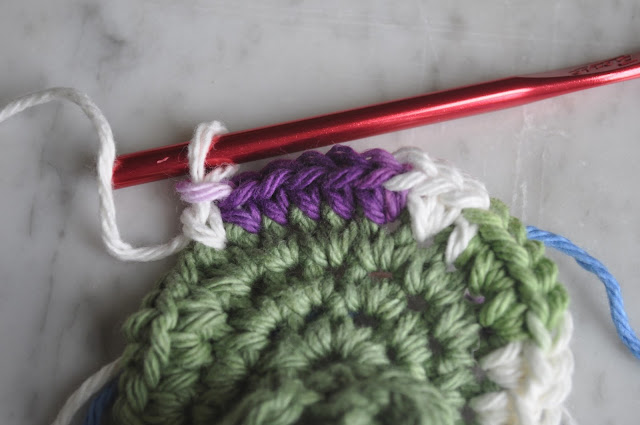 This is all so completely flexible - again, the density of your puff and its ruffliness is dependent on how many single crochet stitches you make in each stitch as you crochet along. You can change this up throughout the whole thing. If the ruffles feel too loose, double up on those single crochet stitches. If it starts feeling too dense, single crochet for a while.  Really... it’s pretty hard to mess this thing up.

I like to finish my puff by crocheting a single crochet stitch in every stitch for the last round. Or slip stitching all the way around looks nice, too.  This isn’t necessary, but I think it might make it just a bit smoother. And it’s fun to add a different color on that last round. 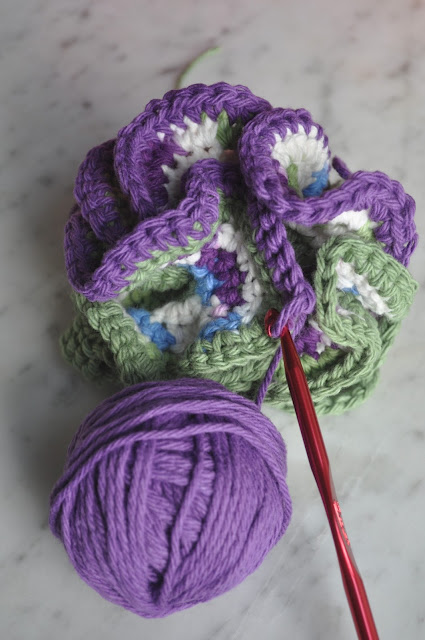 When adding new colors, just add them at any point. You do not need to keep track of the beginning of a round because it won’t show when the puff is finished, and when you’ve gotten your puff to the size you want, you can just stop by making a slip stitch into the next stitch in the row below and you’re done!

This is a great project for using up scraps of cotton yarn. I would guess that it takes approximately a full 3 oz. skein of something like Lily’s Sugar ‘n Cream, but since I like mixing colors up and using a combination of yarns, I never used a full skein of anything.   If you don’t want many ends to weave in, choose a variegated for an effortless change of color.

The variations possible on this puff are pretty endless.  And if you try it, you'll probably find you can't make just one.  Fortunately, you don't have to! 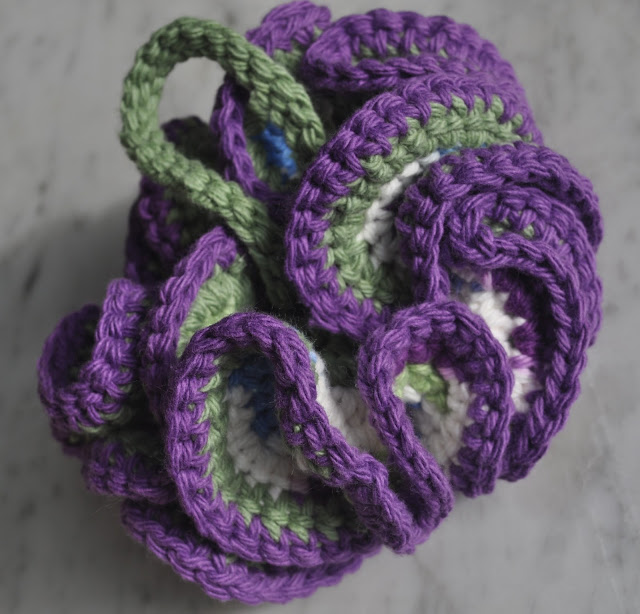 Linked to Small Things Yarn Along
and
Frontier Dreams Crafting On