No method to my madness...

No finished objects, but here's what I'm working on...

First, my progress in the Mandala Madness CAL: 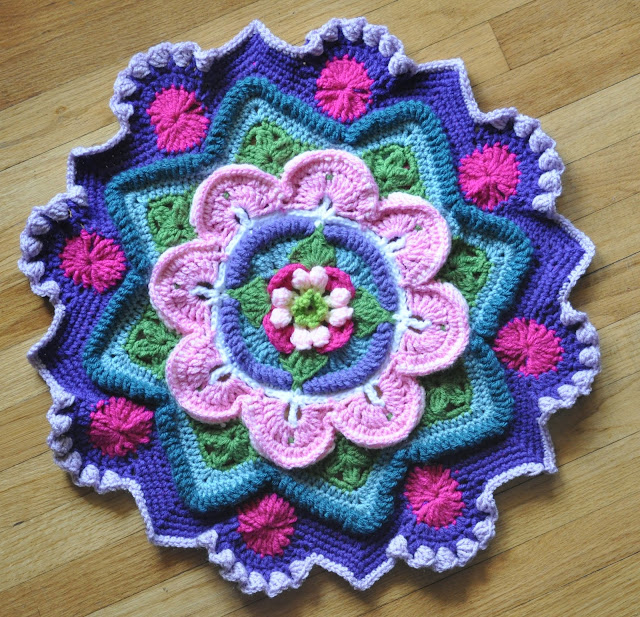 I think I mentioned before that I feel a bit ambivalent about this thing, but this week I think I crossed over and have now embraced the madness.  To tell you the truth, a couple of weeks ago I saw someone else's mandala that was. I think, maybe only as far along as the star shape, and I thought it looked pretty.  So I took a leap and decided to give it a try.  I think if it had been labeled a Mystery CAL I would have remembered that I don't do mystery CALs.   But my brain did not register "mystery" when I checked it out, and only seeing fun colors and neat shapes I somehow thought "Hey that looks like fun!"

And just like that I signed up and began, every week, to torture myself over what colors I'm going to use in a project that I have no idea of what's coming next.  My hope was I  could keep it lively and bold, but not push it over the line into garish.  I torture myself no more.  Clearly, that line is behind me and there's no going back.

So I've embraced the madness.  The unpredictability of what's coming next.  My limitations at understanding color theory.  When all is said and done, I am learning some interesting stitches and the other peeps in the CAL are a friendly bunch.  So I'll continue until I decide I'm done.  And I will bravely show my progress here for next few weeks.

My Diamond Stitch Baby Blanket is coming along slowly.  Not because it's a hard pattern, but I tend to get distracted and have to rip out to correct mistakes.  I'm only a little further than this picture shows.   I really like this pattern and I imagine doing more blankets using it - maybe even an adult sized blanket. 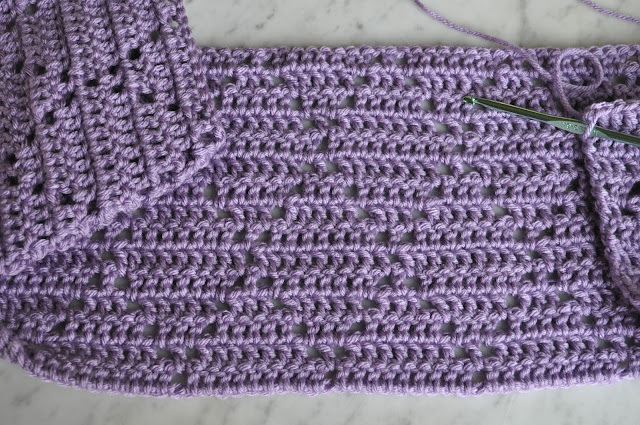 And yesterday I started making an April Showers Doily.  It's being made in another CAL on Ravelry, but this time I knew what I was getting into.   Well...except that I've never made a doily before and I had no idea how hard it is to crochet with thread and a teeny tiny crochet hook.    While it's not the tiniest crochet hook made, this 1.5 mm crochet hook is super little for my middle-aged eyes. 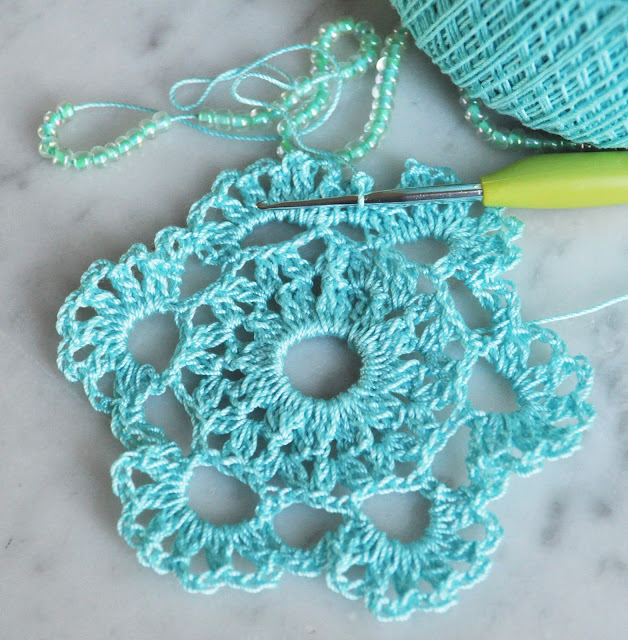 To make it even more challenging I decided to add beads.  And to my dismay, the beads appear green when they're all congregated together.  When I threaded them on, they looked to be the same color as the thread so I'm hoping as I spread them out at the end of this doily they will not look so green, but will somehow take on the color of the thread (or something that goes with the thread).   And while I'm questioning my sanity I can't help but wonder already what my next crocheted thread project might be.  :^)

Visit the Year of Projects group on Ravelry to see what other Yoppers are up to this week.  You'll need a free Ravelry membership to take a look.  Come join the fun!