We've been settling in - busy with unpacking, then Christmas with our boys home and sister-in-law visiting (celebrated on Christmas Eve), and then a lovely meal at just about the only restaurant in Indianapolis open on Christmas Day (with brother-in-law and sister-in-law).  And then with the holiday behind us, more unpacking.
It's all been complicated (and slowed down a bit) by a sore knee (that started the weekend after we were totally moved in) and a sore thumb joint that's plagued me off and on for a few years, but it got much worse with all the packing and unpacking.  They both get to feeling better with ibuprofen and ice and braces, so I keep hoping they'll heal up on their own, and then I do something to strain them again and I feel like I'm back to square one.  If they don't start to get to noticeably better soon, I suppose I should have them looked at.  Sigh.  I really didn't want to start a new year with new reasons to see doctors.
Anyway...  now that some of the rooms here are looking presentable, I feel better about sharing some pictures of our new place.  At least spaces here that inspire me, delight me, or maybe even need some help.
To bring anyone who might be in dark up to speed, here's the background...  Hubs and I had been talking for several years about looking for a one-story home that would be easier to grow old in than our tri-level of 23 years would be.  A fire was lit this summer when I was visiting a friend and she told me there were two houses behind her that were for sale.  They were lovely homes, in a quiet neighborhood, and we did go to see them, but as much fun as it might have been to have a built-in friend as a backdoor neighbor, we just weren't ready to jump at that point.
But the fire was lit.  We got our heads into the game, figured out the financial part, started talking about what we wanted in our next home, and the search began.  Last summer I didn't write much at all about the search, but we often joked that meeting our realtors (they were a couple team) at new houses every weekend, was some of the best socialization we had during those four months.
We really liked our realtors - both professionally, and as people.  Never pushy, they knew we wouldn't jump to make an offer unless we were both confident in buying a house, and that house needed to check some important boxes we both had.  They seemed perfectly content with that arrangement.
Near the end of October, we bought (closed on) a 30 year-old house in a small country neighborhood just a couple miles outside the town we've lived in for the past 23 years.  Thirty year-old houses come with issues (some we knew from the outset), but overall, it's a very pleasant house and property.
My decorating style is pretty simple, and it could be many months before we start hanging anything on walls, but today let me invite you into our favorite room at the moment - our den:
Pictures were taken on different mornings - just to see if I could get better pictures in different light: 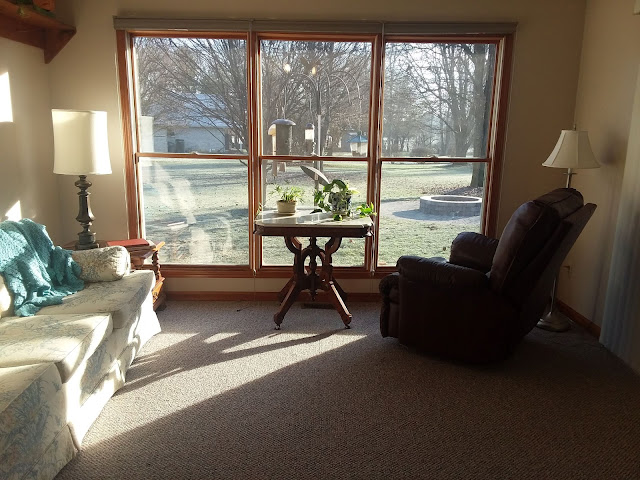 It's challenging to get both the window and it's view, and the inside of the room to show well together, so your first glimpse of this room, unfortunately, makes it look very dark in here.   But it's actually the lightest/brightest room of the house when the shades are open on those three large east-facing windows.
The reason this is our favorite room is, any time of the day, but especially in the morning, we enjoy sitting in the recliner (we take turns) sipping a cup of coffee (hubs) or tea (me) and watching the birds flitter around eating up birdseed like it's their last meal. 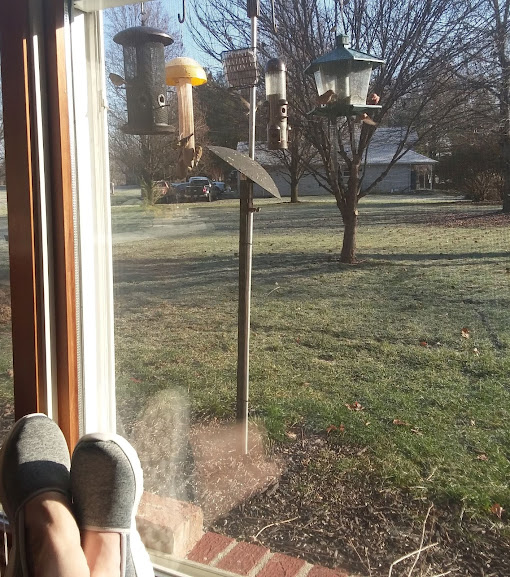 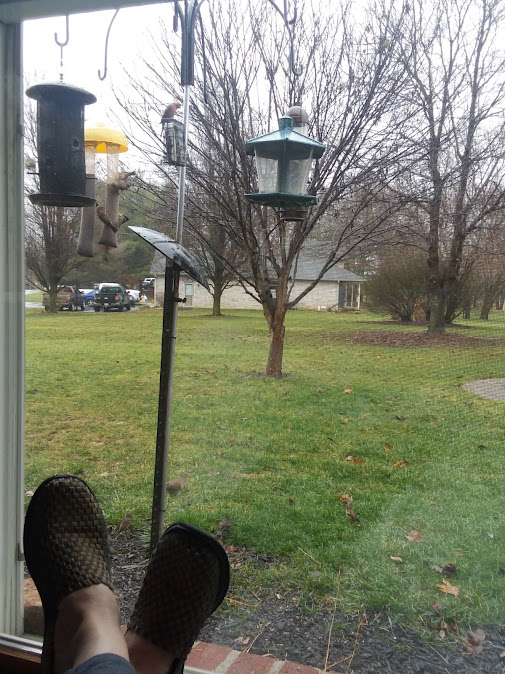 Even on a drizzly cold day, the birds need to eat!
The previous owners left behind this large bird feeder hanger thing, and some of the bird feeders.  It is proving to be great entertainment - as long as we can afford to buy bird seed.  You can't tell from these pictures, but normally each feeder has multiple birds on it, and the birds go through the buffet of seeds like crazy. 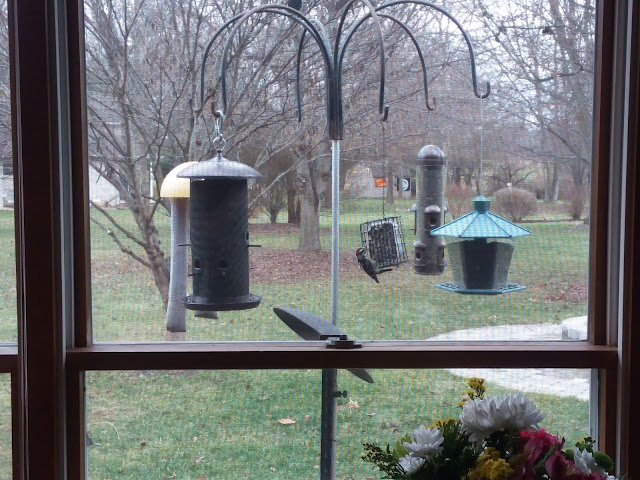 While there are at least two downy woodpeckers who like to regularly visit the suet feeder, I think we may have either a red-bellied woodpecker or a yellow-bellied sap sucker, too.  It's more elusive, and I haven't had long to look at it when it's shown up, but it has a distinctly different red cap than the downy woodpeckers.  Honestly, when looking in a bird book, I thought it looked like a ladder-back woodpecker, but Indiana doesn't appear to be in their range.  So I have to just wait patiently and get a few more good looks at him to be more certain.   I only know it's a couple inches larger than the downy, has a beautiful red cap, and black and white wings.  And has shown up exactly twice for me.
I look forward to removing the window screens this upcoming weekend when it warms up a tad, so hopefully, there will be some clearer bird pictures in the future.  We also have some beautiful blue jays, cardinals, nuthatches and finches of various colors - along with a mob of sparrows.  Who knows what spring and summer will bring.
The past owners called this room a sunroom - which the room probably was originally, but once upon a time someone enclosed the back patio/porch, and with two walls of windows we're calling that the sunroom.  Perhaps a nice picture of that room will come closer to spring time.  At the moment, what we're calling the sunroom is serving as overflow space as we still try to figure out where everything goes.
Oh, okay..  since I imagine you'll appreciate me keepin' it real, here's a peek into the sunroom: 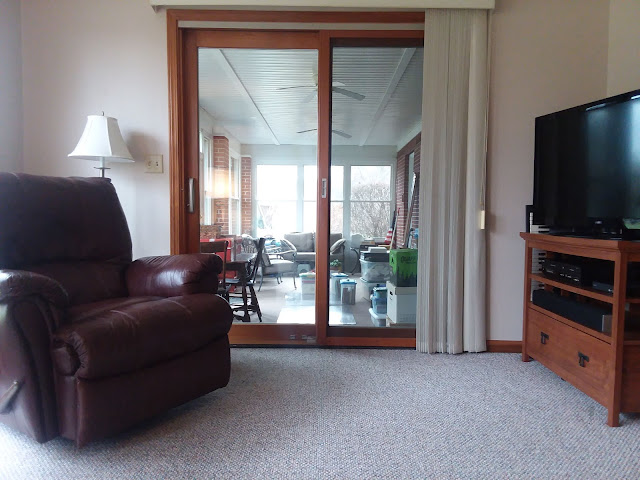 That view, at the moment, isn't very pretty, so usually the blinds are closed.  One of these days we'll either figure out where the stuff in those boxes go, or maybe decide we don't actually need that stuff.  Sad to think we had to move it here to realize that, but such is life.
Back to the den before we leave: 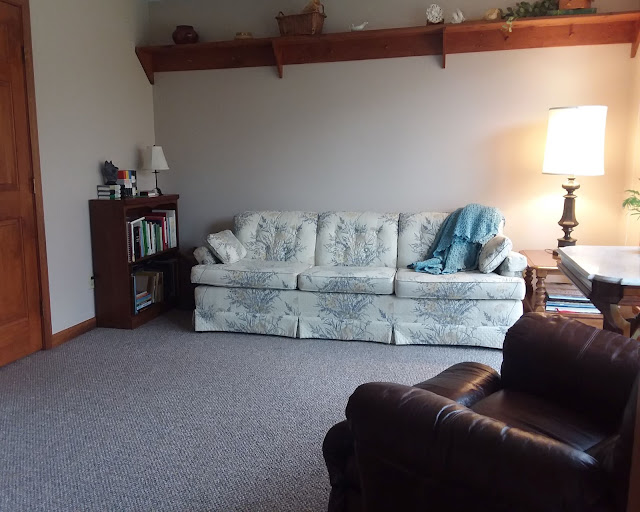 That couch above, we brought home (in 2020) after hub's mother passed.  It was his parents' formal living room sofa for years - hardly ever sat upon, though we have pictures of us (pre-children) sitting on it nearly 40 years ago - it's that old.  After bringing it home, I said, "that would look great in a sunroom", but it sat in our living room for over a year, looking very old-fashioned and too small, hoping against hope we'd someday live in a house with a sunroom so it could prove me right.  It may make its way out to the sunroom come spring, but for the winter it makes a nice cozy spot to take a nap on.   And that blue crocheted blanket looks like it was made for it! 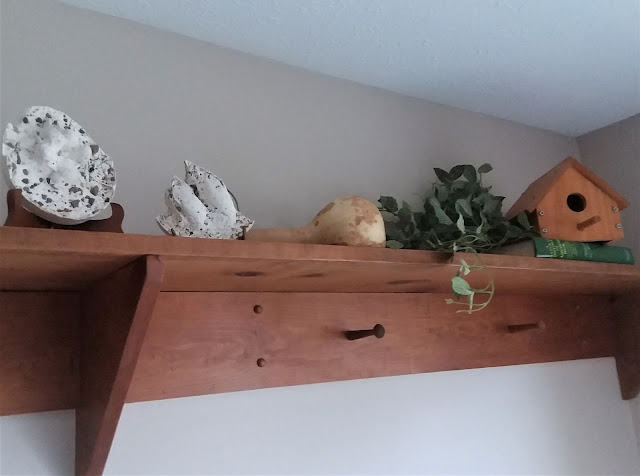 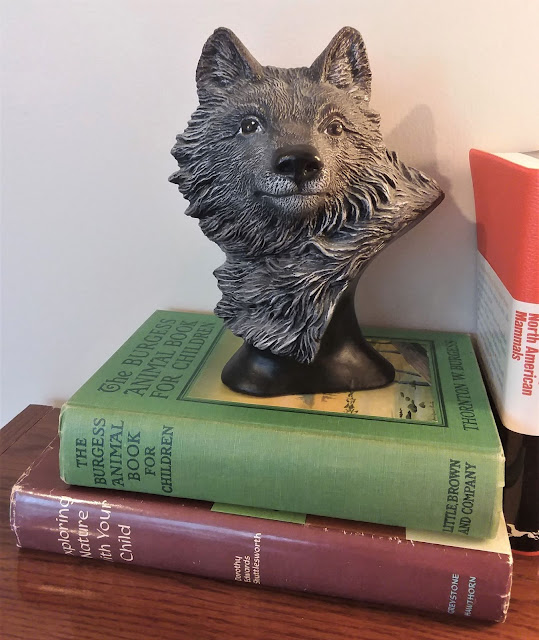 Ceramic wolf's head painted by middle son when he was a teen.  Gorgeous dry-brushing. 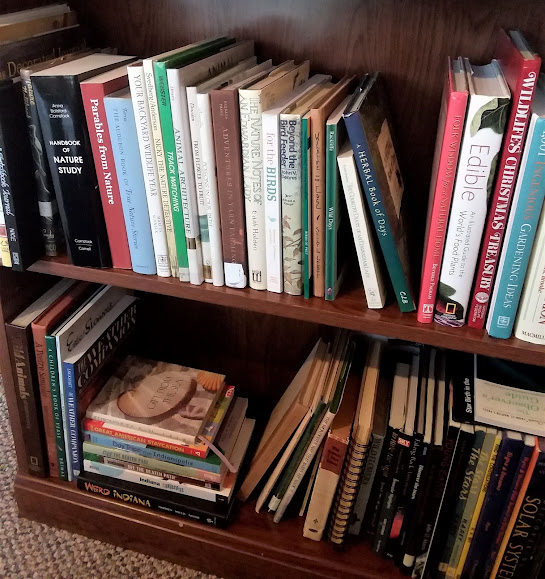 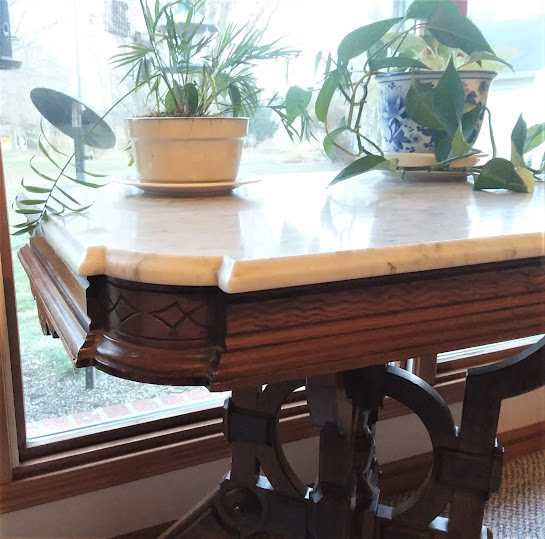 And that, dear reader is our den.  I can't believe I made a whole post about one room.   Little by little, I'll show you around more.  Some rooms still are in process.  I do hope to soon be crafting again.  In fact, I'm thinking about inviting you into my craft room for some organizing and maybe downsizing of supplies.  But as for actual crafting, I need to give my hand a bit of a rest - not sure when crocheting or knitting or stitching will resume.  Crafting is beginning to feel like something I used to do - a long time ago.  'Till I get back in that saddle, I'm enjoying crafts vicariously through other's blogs.
Thank you for visiting! And please come back again for another visit.  Now that life has resumed some normalcy, I'm going to try to find ways to not be so scarce.  😊
Happy New Year to you, and I hope you have a healthy and happy 2022.
Posted by Becki